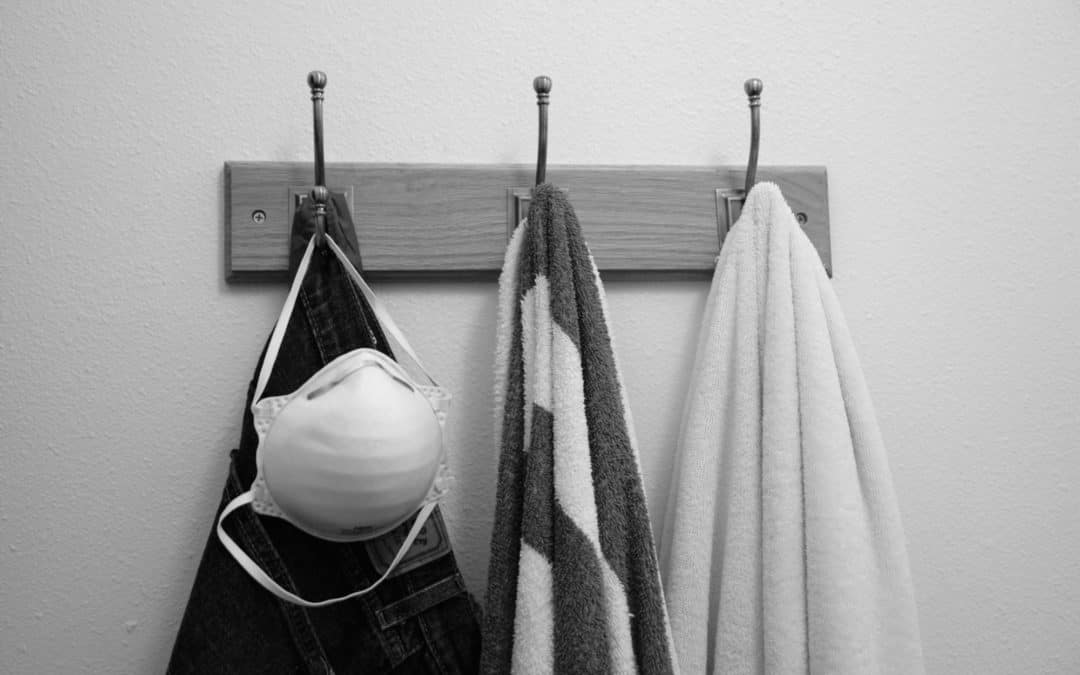 Yesterday gold went up as high as $1,742 before selling off and is now currently trading around $1,688.

Interest rates have been slashed down to 0%-.25% and QE has been rebooted in earnest.

Government spending continues unabated. The US Federal Deficit is approaching $4 trillion and the US National Debt is over $24 trillion.

The rate of active COVID-19 case growth in the US continues to slow after peaking on 19 March.

With several states considering reopening in May, at least in some capacity this trend will certainly be disrupted and the rate of active case growth will probably rise again.

Not surprisingly, the major US indices bottomed a few days later on 23 March.

A popular theory is that this rapid selloff and equally rapid rebound is a V-shaped recovery.

While this certainly is the case right now, I believe that the fallout from COVID-19 will continue for many months and US stocks will make new lows. We’ll see which organizations and governments have been swimming naked as the tide is going out and the results will probably be ugly. 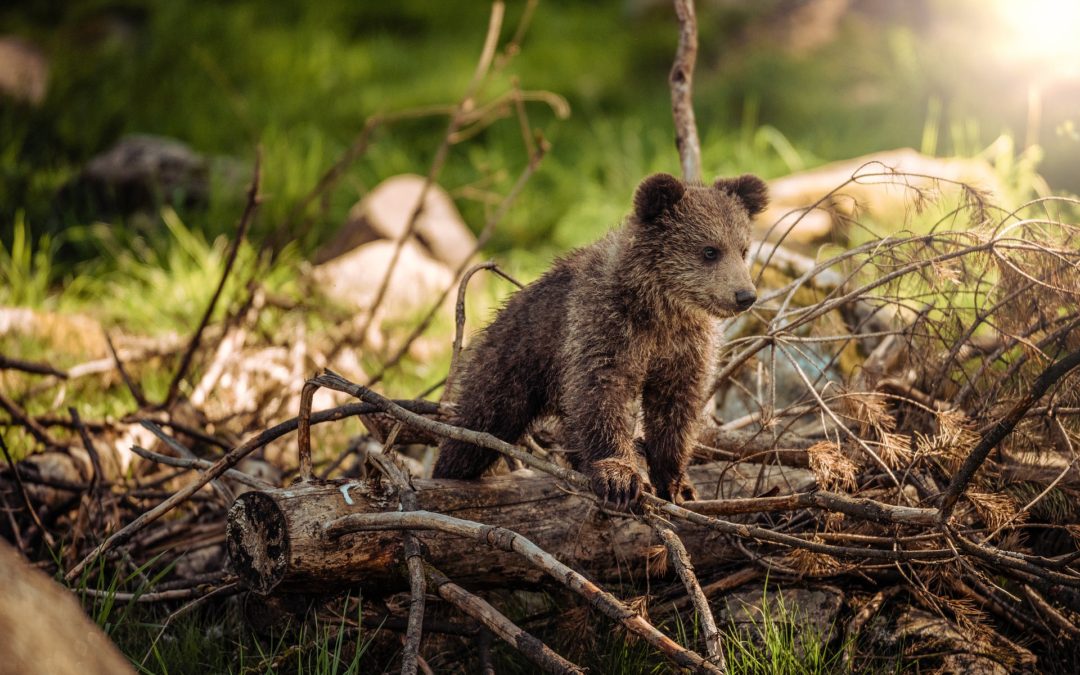 Since early 2009 US markets have been in a bull market. In less than a month that 11 year bull market has ended and we are now officially in a bear market. The big three US indices are all down more than 20%.

Interesting that the trigger to the selloff was something no one was expecting. But perhaps the fact that no one saw this specific catalyst coming shouldn’t come as a surprise.

As I mentioned before, making financial decisions out of fear or panic will rarely result in the best outcome. Cool heads will prevail.

At this point in time I have more questions than answers, but in the midst of this bear market there is great opportunity.

Is Now the Time to be “Greedy”?

It’s hard for me to respect Warren Buffett when the man does everything in his power to avoid paying taxes while at the same time publicly saying he should pay higher taxes. It is hypocritical.

Despite my misgivings about Mr. Buffett I can’t argue with the long term performance of Berkshire Hathaway.

It’s important to ignore what Warren Buffet says on his virtue signaling tours and look at what he is actually doing with his money.

Others are fearful right now so it could be a good time to be “greedy”. Of course buying things on sale isn’t actual greed but I digress.

Who Knows when the markets will bottom out?

I’ve been underweight US stocks and will be using this bear market as an opportunity to dollar cost average into US index funds and ETFs. I do not believe it is possible to time the bottom so I’m not going to try. What I am trying to do is to buy into the market at an interval of good prices.

Compared to the highs stocks are on sale at a 25% discount. They might go on sale for 40% off or even 50% off but in either case it is a significant discount from the mid-February highs.

How is Gold Working Out?

Gold has been a decent hedge so far. However during a panic the yellow metal will probably fall as people sell everything. And indeed gold is down from the $1,700 high made earlier this month.

For the first five years after the last financial shock (2008-2009) US stocks were the place to be and gold, which had a tremendous run-up, went into a bear market. Of course past performance is no guarantee of future performance, but it can provide a guide for how markets could possibly perform.

And despite this large drop, for the past 10 years, stocks have done very well.

The Fed Tries to “Help”

Not one to stand by and allow the free market to operate–the US Federal Reserve announced more quantitative easing (QE4) on Thursday. Of course if you count the not-QE QE, this would be QE5, for those keeping score at home. It is also anticipated that rates will be cut again.

In short the rates have never been this low going into what could be a recession.

The Fed is entering this bear market (and potential recession) with interest rates already so low they have little ammunition to “help”. 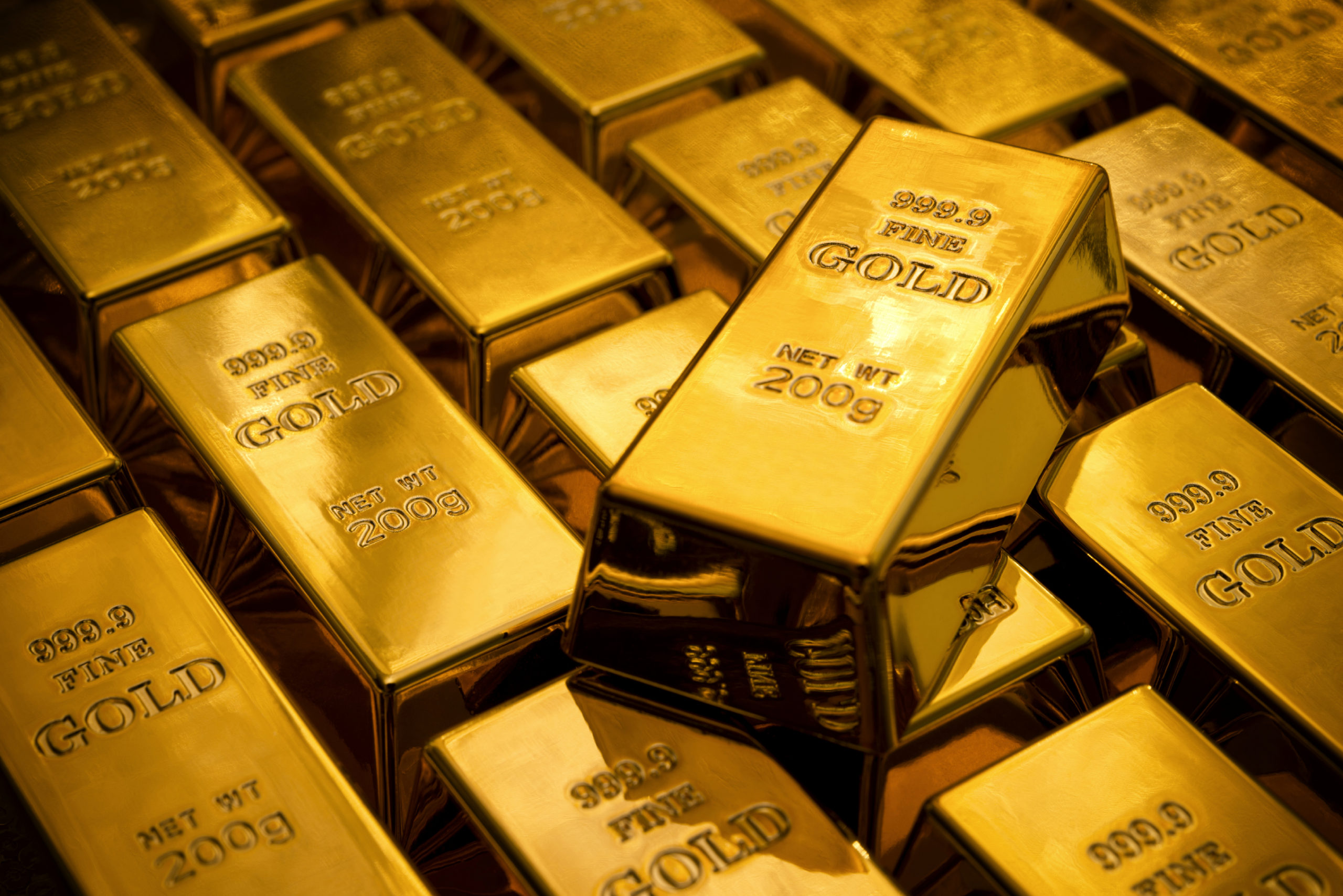 Gold reclaimed the $1,500 level just a couple months ago over Christmas. Now the yellow metal has topped $1,600 and is trading north of $1,610. Gold also reached this level earlier this year on January 8. However, long term Gold has not been at this level since March of 2013.

With a US stock market that is 11 years in a bull market, profligate government spending, artificially low interest rates and geopolitical uncertainty in Iran and China, gold will likely remain a safe haven place to park capital.

However, for those over allocated gold, this is also an opportunity for some profit taking. 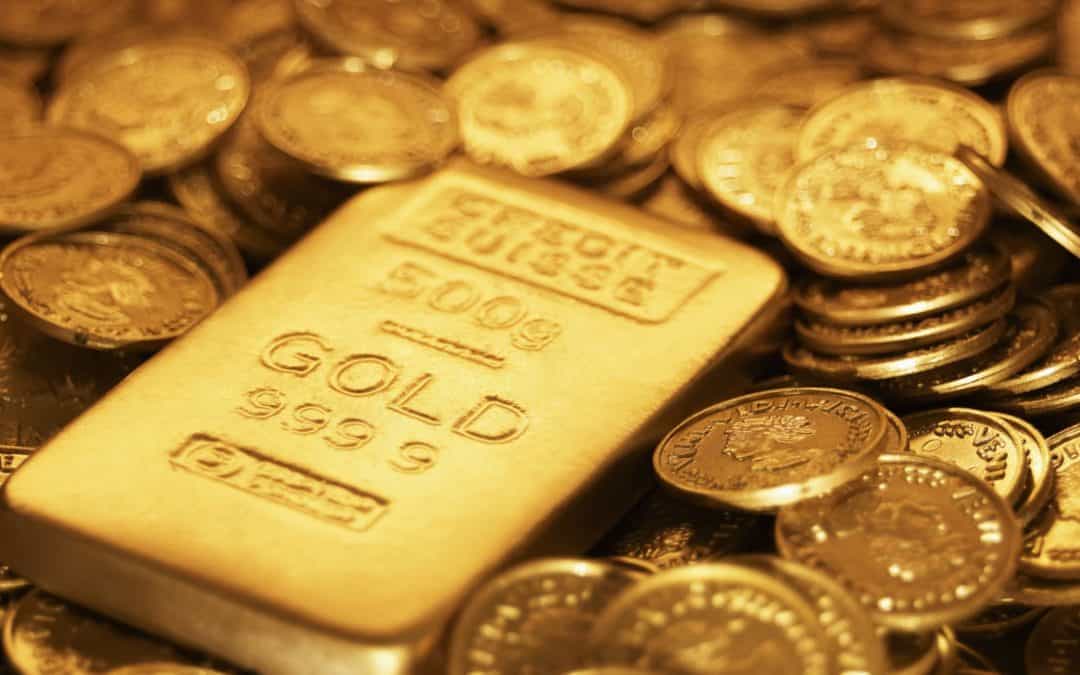 I had previously written about how gold has been on the receiving end of a severe price drubbing. Not so now.

The fundamentals of gold are very strong. Gold was is a downward channel and this strong move upward could be a continuation of the gold bull market that began at the end of 2015/early 2016. 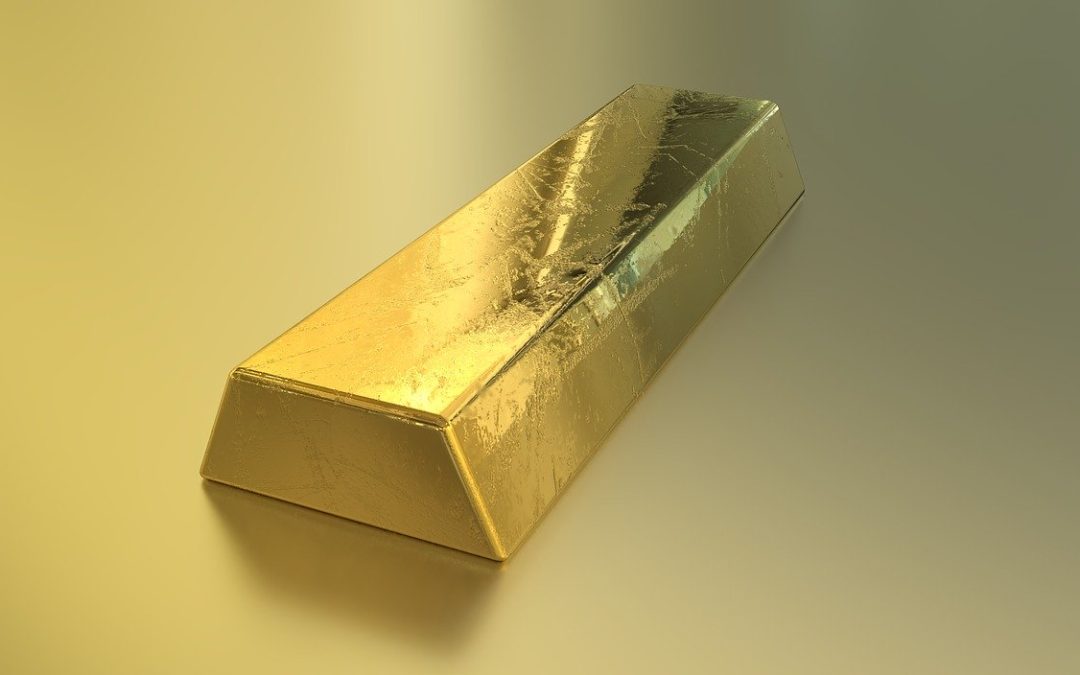 In what I describe as an anti-Black Friday sale, Goldmoney announced on the 29th of November a new $10 per month minimum storage fee.

Goldmoney (formerly BitGold) already had storage fees, but they were proportional. Now, smaller accounts might not make financial sense anymore.

I’ve determined that Goldmoney doesn’t make sense for me anymore.

Goldmoney Fees are Too Darn High

It is always important to understand the fees a financial services company charges, and Goldmoney has plenty. There is a 0.5% gold buy/sell fee and a $20 wire transfer fee for withdrawals (funding can be free with EFT).

As a simple example, $10 per month fee on $120 worth of stored gold would be equal to the value of the gold stored after just one year.

Some other considerations, which in my view don’t help enough, are that Goldmoney does offset the minimum fee with commissions paid and the accounts are insured.

If you have a larger account, insurance is important to you, or conduct a lot of transactions, Goldmoney might make sense.

I was previously an advocate of this low cost way to store physical precious metals around the world. With this new development in fees I have decided to withdraw my endorsement of Goldmoney.

Because of the smaller amount of Gold I have with Goldmoney, I’ve elected to sell all my gold in their custody. At this time I have no intention of doing business with Goldmoney again.

The insurance is an important consideration, however, a safety deposit box or other secure location is going to be much more cost effective for the small investor. 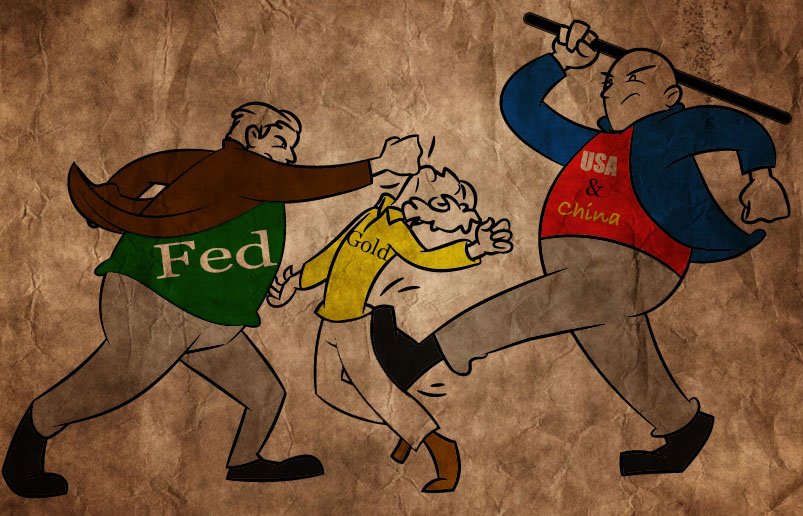 The S&P 500 made fresh and new all time highs Friday. Bonds were down, the dollar index was modestly higher and gold was on the receiving end of a severe drubbing.

On the year gold is still up over 13%. But the over the course of the fall the S&P 500 has surpassed gold’s performance and is up 23%.

However, starting in September, gold has been trending down again and has been drubbed down to the mid $1450s.

I think this is a temporary setback for the price of gold and a buying opportunity for someone who is under-allocated in gold.

2016 was indeed the start of a new gold bull market after gold bottomed out in December of 2015.

The price of gold ebbs and flows a great deal with news and sentiment. Right now the market seems to believe 1) the Fed is done easing and 2) the trade war is close to a peaceful resolution.

Certainly the Fed is not done easing as the balance sheet continues to grow. There are also certain core issues in which Trump and China are both unwilling to compromise on.

A limited trade deal is certainly possible, but I doubt China is going to relent on certain core demands the US is making.

To me the chart looks bearish in the short term. Some potential places gold can find support would be where it is currently trading, at around $1450. Below that perhaps $1400.

If traders become very optimistic about the stock market, could even go down to $1380 or retest the monkey-hammer zone in the $1360s.

Of course it is only my educated guess but I think gold will find support somewhere between $1400 and $1450.