Warren Buffett is considered to be one of the most successful investors. He’s one of the wealthiest people in the world and he’s also fond of publicity and public appearances.

If you have some humility and don’t get caught up in jealousy you can learn a lot from wealthy and successful people like Warren Buffett.

My own Father is fond of saying that poor people should take rich people out to lunch. The idea being that the wisdom that can be gained from the wealthy is worth more than paying for lunch.

So what lessons can we learn from Warren Buffett?

Do As Warren Buffett Does, Not As He Says

Warren Buffett talks A LOT and shares a lot of opinions. But you shouldn’t follow what he says as advice because he might actually be doing the opposite of what he is saying.

In order to learn lessons from Buffett one must first filter out a lot of what he says.

There is a quote from Daniel Loeb that summarizes Buffett’s contradictions quite succinctly.

“He criticises hedge funds yet he really had the first hedge fund,” Loeb said. “He criticises activists. He was the first activist. He criticises financial service companies, yet he likes to invest in them. He thinks that we should all pay more taxes but he loves avoiding them himself.”

Without further ado here are three lessons we can learn from Warren Buffett.

While publicly discussing how he wants to pay more taxes Warren Buffett has taken extraordinary steps to reduce his taxes.

From how he structures his businesses to how he is paid to how he has bequeathed his inheritance Warren Buffett does all he can to reduce his taxes. He gets paid through dividends and long term capital gains rather than ordinary income. He’s also left 99% of his fortune to a private charity to avoid paying inheritance taxes.

Lesson number one from Warren Buffett is Reduce Your Taxes.

There are a variety of ways you can legally reduce your taxes: IRAs, 401ks, FSA, HSAs, charitable contributions, capital gains. I discuss some of them in Five Tax Strategies to Keep More Income.

Real estate is also an excellent way to increase your wealth in a tax advantaged way. BiggerPockets.com is an excellent Real Estate resource.

Lesson 2: Invest in High Quality Companies that are Undervalued 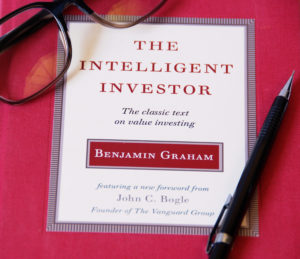 The Intelligent Investor by Benjamin Graham

Warren Buffett loves great value. Much of his investing philosophy can be traced back to Benjamin Graham, the father of value investing.

According to Investopedia Buffett looks at six criteria for stock investments:

1. Has the company consistently performed well?
2. Has the company avoided excess debt?
3. Are profit margins high? Are they increasing?
4. How long has the company been public?
5. Do the company’s products rely on a commodity?
6. Is the stock selling at a 25% discount to its real value? 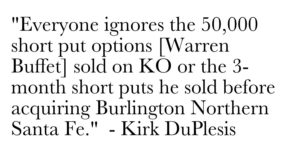 But Buffett has billions in derivatives as pointed out by Kirk DuPlesis of OptionAlpha.com.

In the article above Kirk talks about two ways Buffett uses derivatives:

1) Uses naked, short puts to lower the cost basis for purchasing stock or target companies that he wants to acquire.

2) Sells short index put options when volatility is at it’s highest, knowing that volatility is the one factor that is overpriced all the time.

I’ve written about trading options and think that done correctly it can be an excellent way to bring in monthly income. I’m interested in utilizing strategy one above more often as I open new stock positions.

Those are three lessons I’ve learned from looking at what Buffett does, not what he says. Buffett probably gives some advice that is worth following directly but you have listen through a filter and weigh heavily what he actually does over his words.