Stocks are Overpriced and Due for a Significant Crash

Up until the last few trading days, using the Shiller PE ratio*, there has only been one time in the history of the S&P 500 when the Price to Earnings level was higher, and that is the peak of the dot-com bubble. 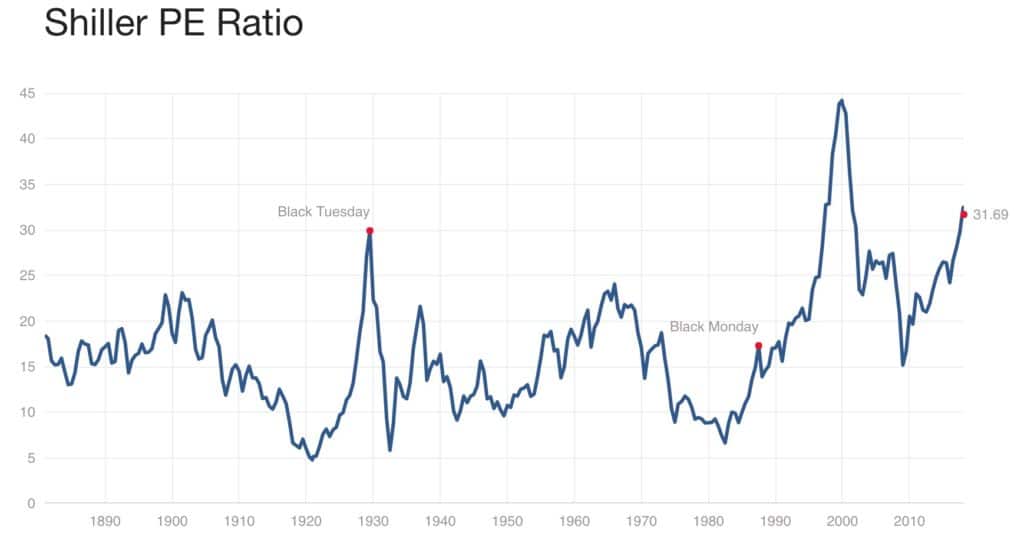 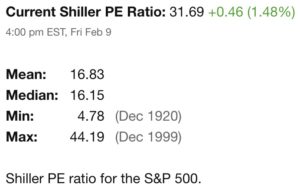 While imperfect (I tried in vain to find a Price to Free Cashflow chart for the S&P 500), the price to earnings ratio is essentially how much a stock (or in this case the S&P 500 index) costs relative to it’s earnings. A lower PE is better because it means you are paying less for a stream of income.

Price to book is another metric we can look at and the price to book ratio of the S&P 500 is at a level not seen since the 2008 financial crisis. 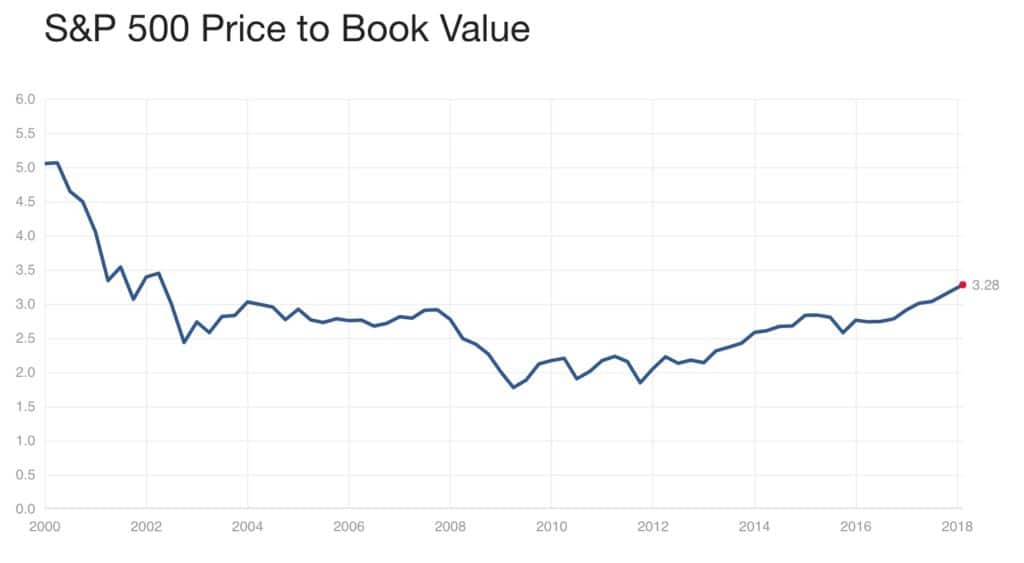 I want to pick on Netflix as an example of an overvalued stock.

One of the most important metrics for evaluating a company is free cash flow. Earnings can be a little suspect because of accounting gimmicky but it is tough to hide free cash flow numbers. It’s one of my value investing metrics. 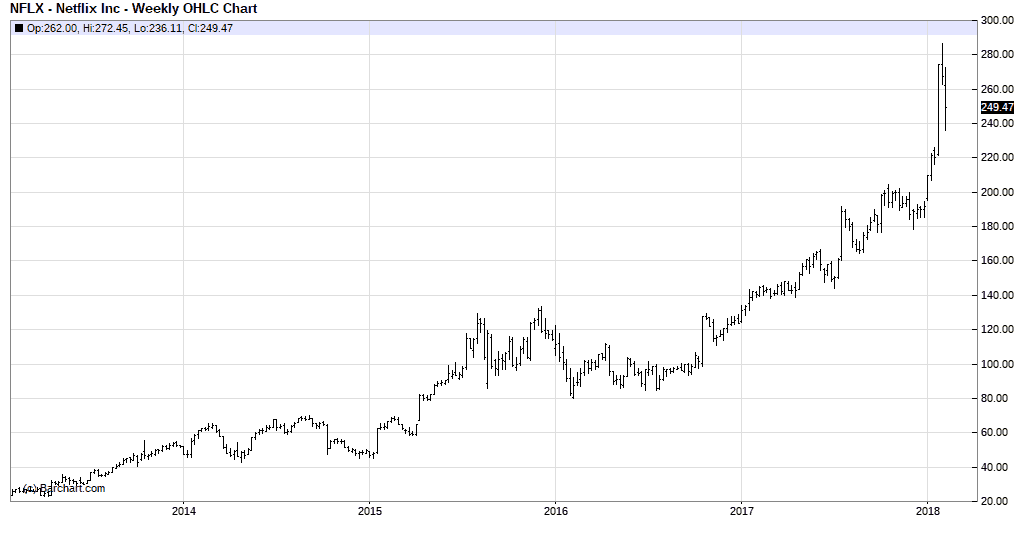 So they are bleeding money and yet as you can see from the chart above, apart from this last week Netflix stock continues to climb.

What is Causing the Stock Market to Rise?

The United States Federal Reserve has bought bonds to lower interest rates and has also bought other toxic assets (like mortgage backed securities “backed” by mortgages that had defaulted).

In the wake of the 2008 financial crisis the Federal Reserve balance sheet has swollen to over $4 trillion. The chart below shows the Fed’s balance sheet in millions of millions (aka trillion). 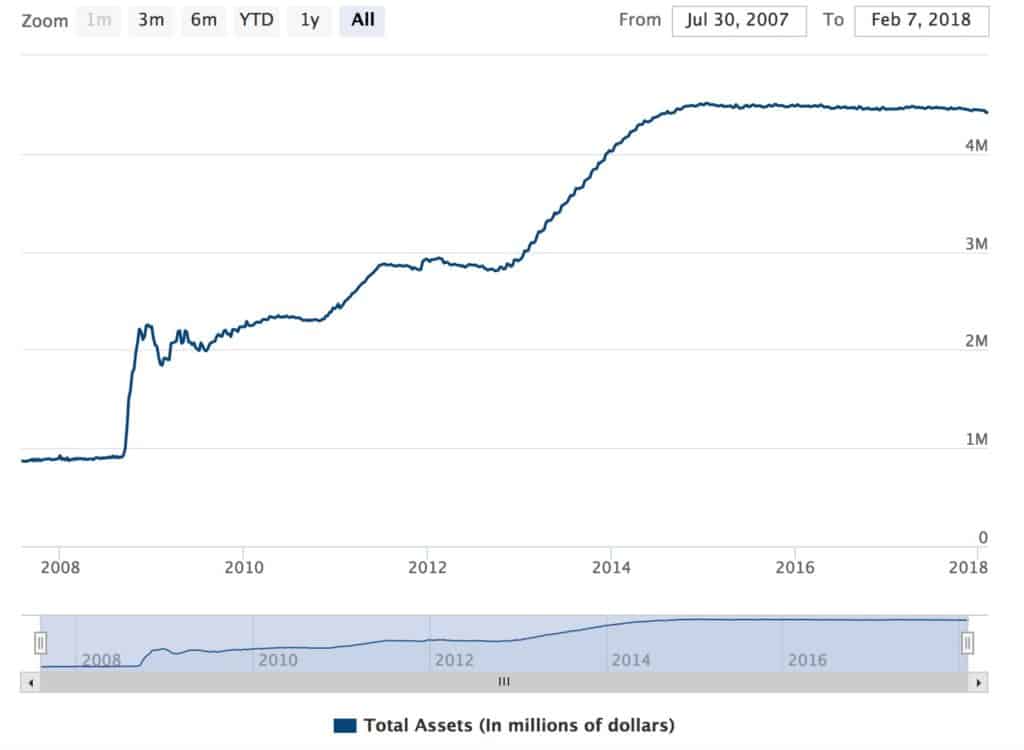 This has driven down bond yields and driven up bond prices.

This makes it cheaper to borrow money to buy stocks. It also forces income focused investors to forsake bonds (which have little to negative real yield) and instead pour money into dividend paying stocks.

Companies can also issue bonds at lower rates, and use the proceeds to buy back their own stock.

The Stock Market is Overvalued

Stocks are overvalued and as bubbly as can be due to reckless US Federal Reserve monetary policy. Last Thursday the 8th the stock market closed in correction territory. It rallied back Friday.

I don’t know if this is the start of a larger selloff into a full on bear market or if this will be contained to a correction.

Since the lows of the 2008-2009 financial crisis there have been several corrections and even a 22% drop in 2011. Those were in an ultra accommodative monetary environment and not in a tightening cycle.

This probably *should* be the start of a bear market but the bulls and the Fed might be able to bid the market back up as they have several times before.

I do know that stocks are overvalued and due for a correction. If the Fed does step in to prop up the markets it will be more negative news for the dollar. The Fed also doesn’t have much room to cut rates and would either have to sit by and do nothing (unlikely) or restart quantitative easing and negative rates.

This should be positive for foreign value stocks and precious metals. From the lows in 2009 the S&P 500 is up 293%. Even if you bought the S&P 500 at the peak of the 2008-2009 bubble you’d be up 80%. The dollar hasn’t tanked so dollar denominated stocks have been a winner. However, if prices and fundamentals mean something, eventually stocks will correct or the dollar will implode. When that happens it will be critical to your financial survival to have alternative investments in place.

This is part 4 of 5 of what I’ve decided to term The Economic Conflagration series where I discuss the faulty wiring pervasive the global economy:

Part 1: A Deadly Electrical Fire you Need to Know About
Part 2: The Real Economy is Weak
Part 3: Crushing Debt in the United States Limits Economic Growth
Part 4: Stocks are Overpriced and Due for a Significant Crash
Part 5: What you can do about it

Part 5 will be release in the coming weeks. Subscribe below to ensure you don’t miss it.