Illinois: Microcosm of the United States

When an entity has no savings and the entity spends more money than it gains in revenue it must be going into debt.

This basic truth applies to people, households, businesses, governments and any other organization.

Many people and most governments don’t particularly care about this fact. Spending today and paying for it in the future is more politically popular than saving and fiscal discipline.

A great example of this recklessness and the ensuing crisis is Illinois. But the dire warnings aren’t coming from some fringe blog or conspiracy theorist. They come from Illinois Comptroller Susana Mendoza.

“I don’t know what part of ‘We are in massive crisis mode’ the General Assembly and the governor don’t understand. This is not a false alarm,” said Mendoza, a Chicago Democrat. “The magic tricks run out after a while, and that’s where we’re at.”

Illinois hasn’t had a budget in 2 and a half years. The state’s debt has the lowest credit rating of any of the United States.

Illinois is a preview of the United States

The borrow, print and tax is a tired set of plays from an old playbook that doesn’t work. But I think it’s the same set of strategies the Federal United States government has been and will continue to use. The main difference is that the Federal government has a virtual printing press and can monetize the debt. Illinois doesn’t have it’s own currency that it can create more of out of thin air.

When the US Federal government has a debt that is due, they can issue more debt (US Savings Bonds, Treasuries, etc) and they find a willing buyer in the United States Federal Reserve as well as private investors and other governments.

When the Federal Reserve buys US government debt it is very harmful to the economy and it’s the reason why the US dollar has lost most of it’s value.

But knowing the playbook the government uses allows you to pick appropriate defensive plays. Insolvent governments try to raise taxes so investing in tax advantaged retirement vehicles is smart.

The government inflates the money supply so invest in assets like gold and silver that can’t be devalued by money printing.

Some folks like Simon Black even recommend US citizens getting a second passport so that if things get really bad, one can simply leave the country.

I’ll be keeping an eye on Illinois. It’s a example of how a government will react when it’s insolvent. I think it will look very similar to what the US will do when it’s debt problem hits the fan. The X factor is that Illinois does not have a printing press, so the effects of fiscal recklessness are much harder to paper over (pun intended). But the printing press only delays the inevitable. If a government could print wealth then Zimbabwe, Venezuela and Weimar Germany would be the richest countries in the world.

The Number One Cause of Bankruptcy in the US

I’ve started a new career in the financial services industry helping people protect their finances in the event of death, illness or disability.

I enjoy it and it goes right along with my mission on this website where I share how I grow and protect my wealth.

During the initial training at my new job I’ve learned a lot but one of the more surprising facts I’ve come across is the number one cause of bankruptcy in the United States.

As a relatively young, relatively healthy person, I’m interested in making money, saving and investing it and building wealth.

But it is important to keep in mind the importance of protecting and preserving the wealth one does have. After all, what I spend 40 years building my wealth but then I get cancer and have to spend it all on medical bills?

If you own a home you probably have homeowners insurance to protect you from fires, floods and other damage. If you drive a car you have insurance for that. So why wouldn’t you insure your life and heath?

Medical bills are the #1 cause of personal bankruptcy so can you afford not to think about it?

True insurance is risk transfer. You trade a risk with a high cost (in the case of homeowners insurance let’s say your house burning down), in exchange for a lower cost loss (insurance premiums) and a high payout if you need it.

So if your $250k house burns to the the ground your insurance company will help you buy a new one. You hope nothing happens to your home but if it does you’re covered. You sleep better with the peace of mind knowing that if your house does catch fire you will be able to rebuild or buy a new place to stay.

So you’ve transferred the risk to your insurer.

When discussing risks some people just don’t want to accept the possibility of a bad thing happening. They don’t want to think about getting sick, or their house burning down. So they deny the possibility of the risk or hope it doesn’t happen. “I’m not going to get sick!” they might say, or “That will never happen!” This is certainly one option. But is it a good option?

When it comes to insuring against a risk there are really only four outcomes. The first two are: either the bad thing doesn’t happen and you don’t need the insurance or the bad thing happens and you do need insurance.

Since you have a choice wether or not to purchase insurance you are either 1) insured or 2) you’re not insured.

There is a risk of getting cancer. I don’t know for sure that I will or I won’t get cancer but my family history is against me. I have a choice of wether or not to buy a critical illness plan that will pay in cash in the unfortunate event I get do get cancer.

So, I could choose to buy insurance, and it may turn out I don’t need it. I would be in Box 1. Personally I would be very glad and grateful if I never got cancer.

Sure, I will have spent money on insurance premiums but I slept better knowing that if I did get cancer I would get a lump sum payment to help offset medical bills. 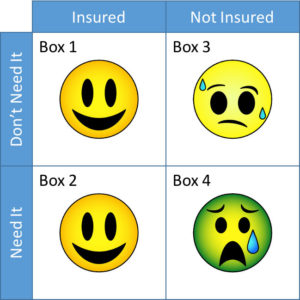 Which Box Represents the Situation You’d Rather Be In?

Well let’s say I do buy insurance and sadly I follow in the footsteps of my grandparents and parents and I do get cancer. I’ll get a lump sum payout that will help offset medicals bills or once I survive cancer (as I plan to do) I could use the money the plan pays me to go on a cruise to celebrate being alive. I’d be in Box 2.

Another option would be to not buy insurance and hope that I don’t need it. After all, maybe I won’t!

That would be nice, I’d save the money that I would have spent on the insurance premiums but I’d probably spend some time worrying about what I would do if I did get cancer. This is Box 3.

The final option would be that I choose not to purchase insurance and I do end up needing it. Medical expenses are costly! I could wind up being like one of the 2 million Americans who in 2013 went bankrupt because they couldn’t pay their medical bills. I don’t want that to happen to me. This is Box 4 and I don’t wind to end up there.

I’m certainly not saying to rush out and buy insurance today. You need to figure out what you’re at risk for, see if you’re financially vulnerable, and then find out if there are plans that meet both your needs and your budget.

But insurance is an important part of my own financial plan and it’s something I think more people should take time to think about.