How I Handled the AmTrust Selloff

On Tuesday 11 April 2017 one of my Value Stock Picks: AmTrust Financial Services (AFSI) dropped from $18.87 down to as low as $13.65 then closed at $15.30. The catalyst was a Wall Street Journal Article titled “Secret Recordings Play Role in SEC Probe of Insurer AmTrust”.

AmTrust Financial Services has been on the rocks anyway after advising that financial statements dating back to 2014 were not to be trusted. 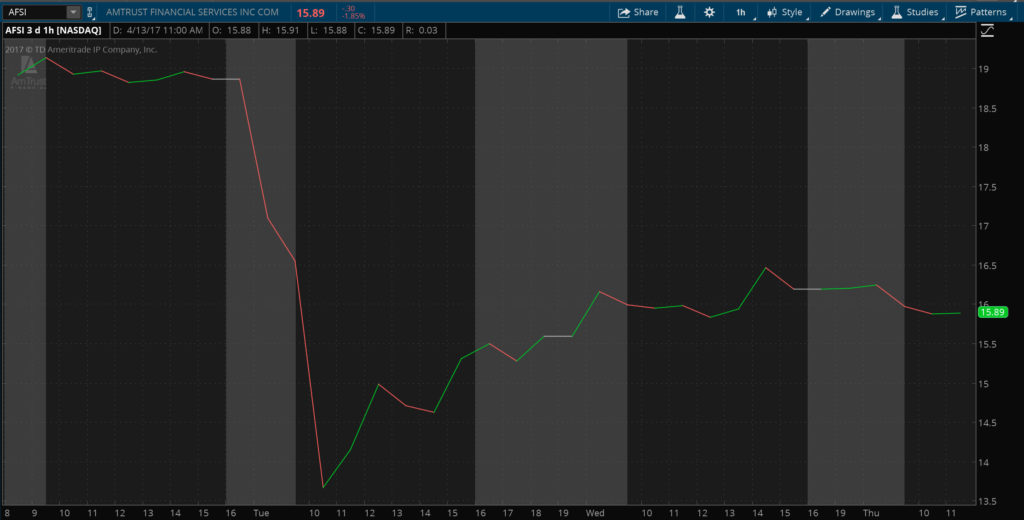 About half of the selloff occurred pre-market

The initial panic selling in these instances is often overdone.

By mid-morning on the 12th AFSI had rallied back to around $16.

On paper I had already made some money on the vertical put spread. I decided to sell the 17.5 September call for $200 in credit. I did this for downside protection. This created a half strangle/half iron condor.

Just looking at the options, my break even point on the downside is $10.81 and on the upside it is $21.74. The option market seems to think there is a greater chance of AFSI going back down as opposed to rising. Currently my position is fairly centered. If AFSI does sell off and start to approach my downside break even I will roll down the call I sold.

I’m currently long 25 shares of AFSI. If I didn’t have the option position and the stock dropped down to say $10, I would be at a paper loss of about $211. With the options the loss at a stock price of $10 would be $160. So by adding options to my stock position I’m limiting my losses and also increasing my potential gains if the stock settles down between $10.81 and $21.74 and volatility drops.

The main risk I have, is if the stock were to really take off above $21.74 before September, I would start realizing losses on the option position, whereas if I was simply long the stock I would be sitting on gains.

Given the large drop and the negative press I think this is unlikely. The September 17.5 call also indicates this is unlikely, with a 25% chance of AFIS being above $19.51 in September. Furthermore, if AFSI would to start to go up significantly, I would anticipate implied volatility dropping and I would probably be able to close out the short call at a small loss or perhaps even a gain.

My overall gain/loss looks as follows.

Obviously using options like this isn’t for the feint of heart. Options used emotionally and incorrectly are a great way to loose lots of money fast.

But in this case I’m actually limiting my risk and increasing safety. If AFSI sells off I reduce my downside risk, if volatility drops and AFSI stays rangebound I make money. The main risk is if AFSI takes off again before September and trades above $22.79. In this case I start to lose money. Based on the option probabilities and recent history I judge this to be an unlikely scenario.

AmTrust Financial has issued a statement essentially denying the Wall Street Journal article’s claims and while I am waiting to hear more this selloff could represent a buying opportunity.

As always this is not investment advice. I’m not advising or recommending anyone buy or sell any security, stock or option. I’m simply sharing what I am doing.