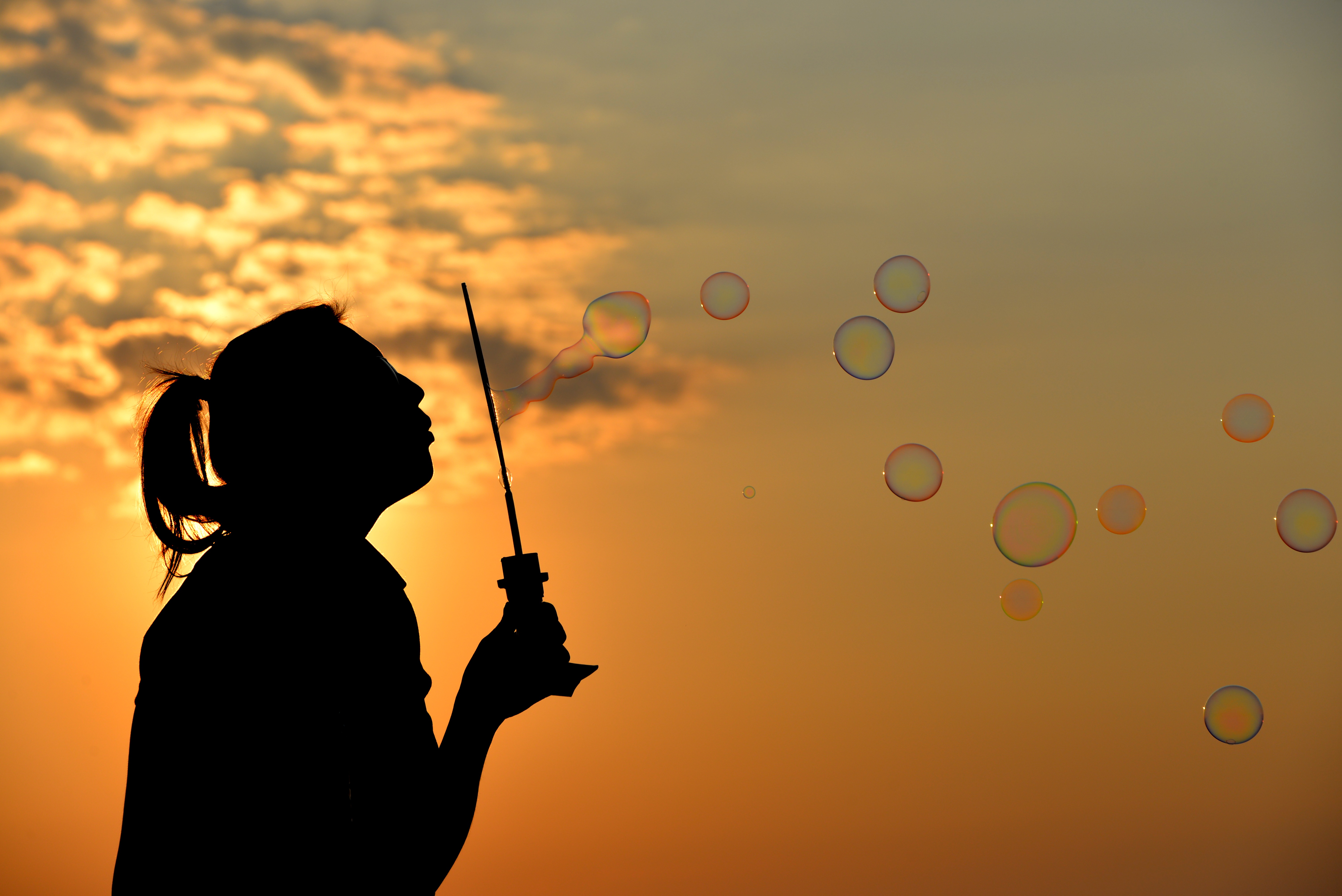 US Stocks and Bonds are in a Bubble

I’m going on record: US Stocks and Bonds are in a Bubble

A bubble is an economic cycle characterized by rapid escalation of asset prices followed by a contraction. It is created by a surge in asset prices unwarranted by the fundamentals of the asset and driven by exuberant market behavior. When no more investors are willing to buy at the elevated price, a massive selloff occurs, causing the bubble to deflate.

In recent history, there was the “dot-com” bubble which burst in 2000 then the housing bubble which popped in 2008. I think we’re close to a third bubble imploding.

I don’t think this is very controversial or insightful but I don’t hear many people talking about it.

Sometimes an insight is just stating the obvious when no one else will.

Now I can’t take credit for this prediction. My views have been formed by folks like Peter Schiff, Simon Black and others who have been making this prediction for years. But I want to get the word out to anyone in my audience not familiar with these figures.

By way of some background, lets take a look at how US stocks and bonds in general have performed.

How have US Stocks Performed? 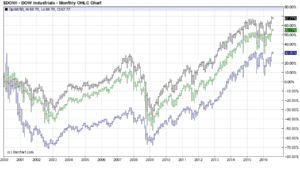 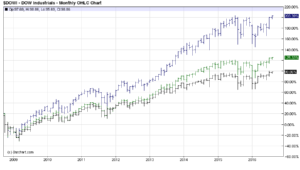 How have Bonds Performed?

Using the Vanguard Total Bond Market Index Fund (VBMFX) as a proxy for the total bond market, we can see since 2000 Vanguard’s bond fund is up 11%. 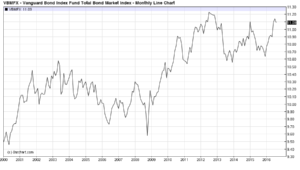 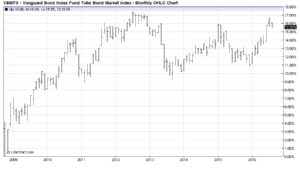 Who inflated this Bubble?

The reason bonds and stocks have gone up in value since the 2008 crash is because the United States Federal Reserve “The Fed” has done three rounds of quantitative easing (where they go out and buy bonds including US treasury securities as well as mortgage backed securities, etc. on the open market) and the Fed continues to reinvest in bonds when they mature. The Fed balance sheet is now over $4.4 trillion.

So like the last two financial crises the bubbles have been inflated by the US Federal Reserve.

According to the Bank of International Settlements, as of Q4 2015 the total outstanding US government debt securities amounted to about $16.2 trillion.

Of the Fed’s $4.4 trillion balance sheet about $2.5 trillion is treasury securities.

The US Fed owns about 15% of US government treasury securities. So by gobbling up 15% of all US treasuries, the US Federal Reserve has inflated the bond bubble and causes bond prices to rise.

By lowering the so called “risk free” rate of return of government debt, investors and speculators have piled more money into the stock market in search for yield. Additionally, any entities who trade on margin, thanks to the lower rates, can borrow and speculate with more money at near zero cost.

It isn’t just the US Fed—central banks around the globe have taken unprecedented action to lower interest rates and buy government debt.

In fact the Swiss national bank holds $62 billion in US stocks.

The fundamentals of US government debt instruments have never been worse

Buyers of US government debt are making unbacked loans to a government already $19 trillion in debt with tens of trillions more in unfunded liabilities.

This means that even if you take the government numbers at face value you are guaranteed to lose purchasing power. The only way not to lose money on these bonds is if someone else buys them at a higher price.

The fundamentals of the US stock market are not stellar either.

Corporations have been issuing bonds and using the money they bring from the bonds to finance share buy backs. They also use non-standard accounting tricks to look more profitable than they actual are.

Corporate profits have started declining since 2014, labor force participation is at multi-year lows.

Stock prices have gone up in anticipation of a recovery not because of one.

Now despite these potentially troubling trends I’m not worried. Why?

I Don’t Own (Many) Bonds

I don’t own hardly any bonds. One of the mutual funds I own is 36% bonds, which amounts to less than $2,000 bond exposure. But that is it.

If bonds are extremely overvalued, as I believe they are, that means my exposure to this bubble is limited.

Now just because I don’t own many bonds doesn’t mean I’m protected. If the bond bubble were to pop and the value of bonds were to plummet this would cause a panic and asset prices of stocks and other assets would likely crash as well.

I don’t think that is going to happen.

Federal Reserve will buy as money bonds (and other securities) as it takes to keep a collapse from happening. We’ve already seen this in countries like Japan, where the Bank of Japan owns 33% of the Japanese bond market and about 55% of Japan’s ETFs.

The Yen has been destroyed by the BOJ. The Federal Reserve has already done a lot of damage to the value of the dollar but could still do a lot more damage.

I believe that the Federal Reserve will destroy the purchasing power of dollars in order to prop up government bonds and stocks. So people who own bonds and stocks will do okay, but savers and individuals on a fixed salary will be impoverished.

“But I’ve Made a lot of Money in Stocks!”

It’s true the US stock market has been on a great bull ride since the 2008 lows.

If I had to buy US stocks and I had a crystal ball I would have sold all my stocks in October 2007 before the housing crisis, bought back in at the lows in March of 2009 and then I would sell at the market top  (if we haven’t already passed it).

However, I haven’t been able to figure out how to time the market.

I don’t think I can just take the approach of selling when the market starts to tank.

Because I don’t think I am going to be fast enough to be able to sell if people start dumping stocks.

Plus if everyone is selling who is going to buy?

When the stock and bond market bubbles are pricked the bubbles could deflate rapidly before the US Federal Reserve and government step in to try to stop the bleeding.

I’ve been in situations in the last two years when there was significant market volatility and I could not even login to my broker platform.

Even if I can login to sell stocks brokers and exchanges could halt trading to try to limit the panic (which would probably cause more panic).

In order to actually keep the stock market from crashing the Fed is going to have to create so many dollars that most of the rise (or failure to fall) of nominal stock prices will be offset by price inflation.

I think I’ll be better off outside of the US stock market and dollars.

That’s why I’ve been an investor and advocate for physical gold and silver, Goldmoney (formerly BitGold), foreign stocks, and yes even bitcoin, although the recent volatility and hacks further demonstrate the risk in bitcoin.

You won’t hear too much about these alternative investments from mainstream sources, unless it is to deride them.

These investments are risky, and frankly I can’t advise anyone to own any of these asset classes. They might not be suitable for you.

But I see the risk in US stocks, bonds, and dollars as much greater and so I’ve chosen to diversify into alternative investments.

And while past performance is no guarantee of future performance this chart shows that gold (shown in Dark red) has already been doing quite well against US stocks, being up 379% since 2000. 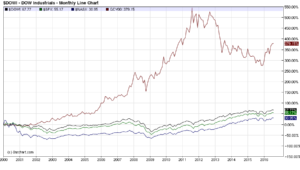