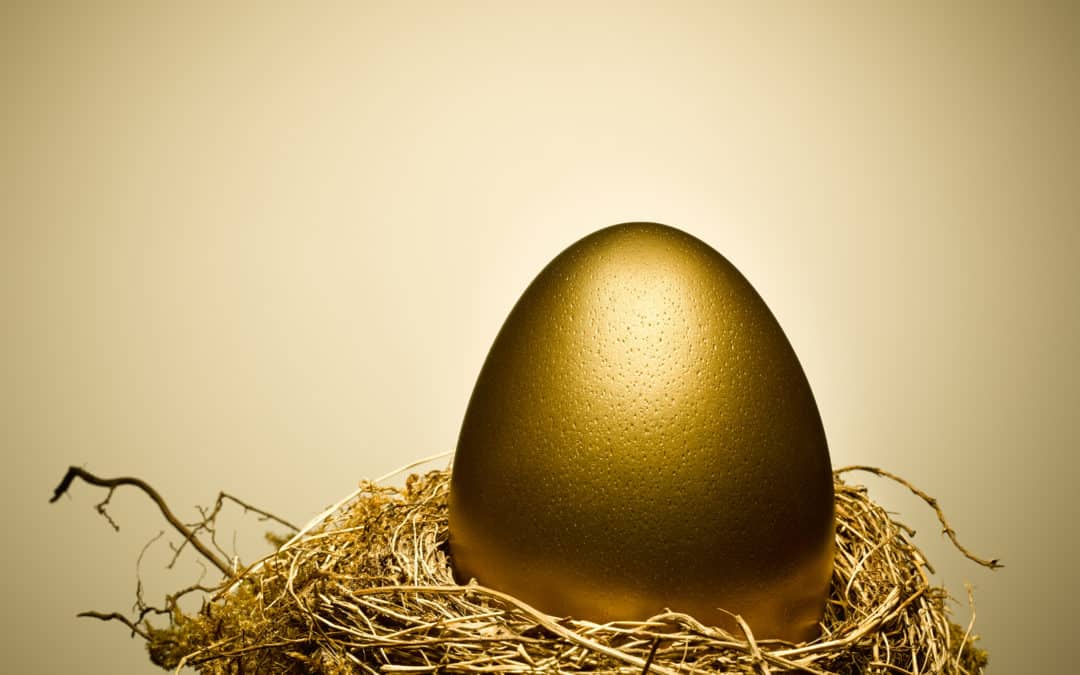 I wrote my first article on this website advocating for holding some precious metals like gold and silver over four years and four months ago on 19 March 2016. At that time gold was trading around $1,250 per ounce.

Now for the first time since September of 2011 gold is trading northwards of $1,900 per ounce. This is a 52% increase in price.

So with gold trading near the September 2011 high of $1,924 I’d like to look back at some of the previous statements I made about gold.

Back in 2017, a few days after President Trump was sworn in, I predicted gold would reach $1,920 during his first (and probably only) four years.

I also think the dollar will lose a great deal of value and the price of gold will outperform and reclaim the 2011 high of $1,920.

Gold has not hit $1,920 yet but it is within an Andrew Jackson (or Harriet Tubman?) of that price.

I would have preferred to have bought gold at the lows of $1,040, but as yet I don’t have a crystal ball that allows me to perfectly time the bottom of markets and I firmly believe that based on the fundamentals gold will make new highs in excess of $2,000.

Gold isn’t at $2,000 yet but it seems increasingly likely. I of course can’t predict the future, just make educated guesses on price and time. But so far gold has been a solid investment. The technical damage after the 2011 high has been filled in and the chart is looking strong.

Silver has done well in the very short term. It’s previous high was almost $50 in April of 2011. It’s been steadily trending downward since then, making a low of $11.64 in March of 2020. Since then it has rocketed back up to $22.82 in a 96% increase in just a handful of months. It is still well shy of the $50 high but silver could provide a better value and more upside potential than gold. However, it tends to be more volatile.

Just about four years ago I wrote the first article on HowIGrowMyWealth.com “Inflation Destroys Dollars“. I wrote about how what I do to protect against price inflation and dollar devaluation. Specifically value investing and precious metals. So in retrospect, how did those investments do?

As a control we’ll add the U.S. Dollar Index ($DXY, shown in green), which compares the dollar’s strength against a basket of other currencies. To represents “stocks” I’d added the S&P 500 Index (SPX) (shown in black).

I’m using the Vanguard Large Cap Value ETF (VTV) as a proxy for value stocks (shown in red). You can see how my current and past individual value stock picks have done here. Gold futures are in yellow and silver futures in gray.

As you can see the S&P 500 has been the place to be. To be fair gold isn’t too far behind. Gold was in fact keeping pace with and surpassing S&P 500 this past April. So while gold has been a good hedge and having exposure to stocks has continue to be important.

Value stocks have lagged the S&P 500, particularly in the aftermath of the December 2018 selloff.

Silver is only slightly outpacing the dollar index, up just 7.15%. Silver has had a few failed breakout attempts, but continues to underperform. The gold/silver ratio that some precious metal bugs talk about would suggest that silver is a better value right now.

Costs continue to rise each year as the dollar loses value. But as measured by the DXY the dollar has kept its value against other currencies.

As I wrote back in November of 2016 in “I Own Too Much Gold“, you don’t want to own too much gold as a percentage of your net worth. The performance of the S&P 500 is a good reason why. If gold ever were to take off a 10-25% allocation would be more than sufficient.

We certainly haven’t see broad hyperinflation yet in the US, but my rent, food and medical costs continue to rise each year in excess of the government measured CPI. As I have for the past four years, gold and precious metals remains an important (albeit minority) portion of one’s portfolio.

If you are just starting to buy precious metals emphasizing silver over gold (while still buying both) could be a good approach.

I Own Too Much Gold

I own too much gold.

I’m an advocate of holding gold. I think it is a key part of my portfolio but I own too much as a percentage of my other assets.

Not counting retirement-specific accounts, gold (and silver) make up 54% of my liquid net worth.

That is way too high for me!

So I decided to read what some public figures have said or written in regard to the percentage of a portfolio that should be gold (and silver).

The following is educational only and NOT SEC-investment-advice. So make up your own mind with the help of an appropriately licensed, registered, and SEC-anointed financial advisor.

Warren Buffett doesn’t like precious metals. He has several famous quotes regarding why he doesn’t like the shiny stuff. While I wouldn’t be surprised if he actually did own some precious metals, but the way he speaks he acts like he doesn’t own any. I’m not a Buffett fan but I think you can learn from him if you carefully sift what he does from what he says or writes.

Mad Money host Jim Cramer recommends no more than 10% in gold. He recommends owning gold via an ETF unless you have enough money to buy physical in bulk.

I’m not a Jim Cramer fan, but I include him because he is a big-time stock guy and yet he still recommends holding some gold. I think there is reason to believe the ETFs don’t hold the gold they claim to so I don’t like gold bullion ETFs. I also disagree that gold is just an insurance policy. Pure insurance (such as term or homeowners) is not an asset, it’s an expense. I think gold is an asset class in and of itself.

Peter Schiff recommends 5-10% in physical gold. I was actually surprised by this low number because Schiff talks about gold and silver A LOT. Schiff’s 5-10% allocation to gold and silver does NOT include mining stocks–but that is a different topic.

In the September 2016 edition of Price Value International, Tim Price proposes owning roughly 25% in “real assets” like gold and silver.

I would like physical precious metals to be around 10-25% of my liquid, non-retirement portfolio. I don’t have an opinion on the amount of silver relative to gold. I am of the opinion that silver is more undervalued than is gold and as a result has more upside potential.

I think gold and silver are a great way to preserve wealth but they are not a great way to build wealth since they don’t pay a dividend or yield. For many readers that might be obvious but I’m still learning!

On the flip side, if my portfolio did have less than 5% physical gold I would consider adding to my holdings via gold maples, silver American eagles, and foreign-stored physical gold via a Goldmoney personal account held by a trusted and low cost custodian.

Precious Metals are On Sale

I share how I grow and protect my wealth and one way I do that is by owning gold and silver. Gold and silver have served as money and a store of value for thousands of years and are a key component of my portfolio.

This year the yellow metal was as high as 1,370 dollars per ounce. But over the past few days the yellow metal has been pummeled and is now flitting about the mid $1,200s. It’s still up 17% on the year, having started down at $1,060. 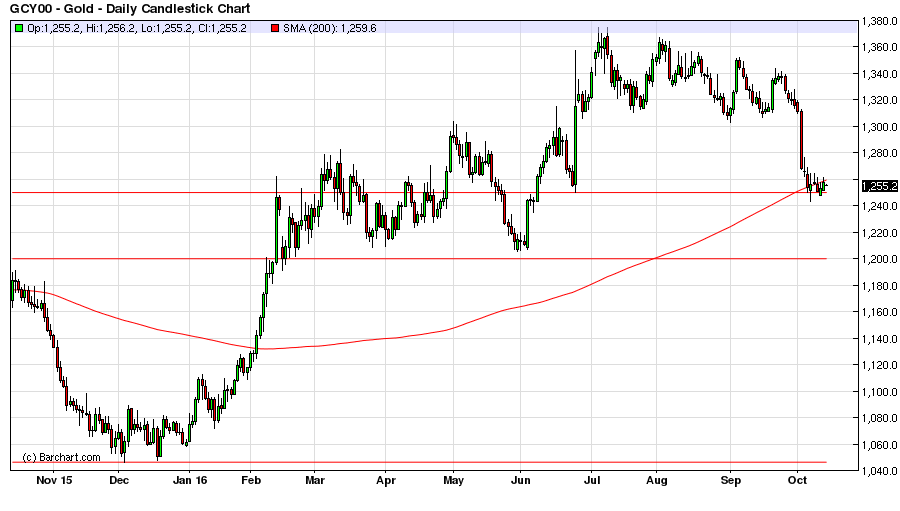 The horizontal red lines are what I think are support levels. There was support at $1,310 but gold blew through that.

Could gold go lower? Sure could.

It’s certainly possible it goes back down to $1,200. But once the Fed does NOT raise rates in November, or even if they do and it’s only by a paltry .25%, I think gold has a lot more upside potential.

I personally think this is a golden buying opportunity. If I wasn’t already over-allocated to gold I would figure out how much free cash I have to allocate to gold. Then I would probably buy half now and then if gold does drop down to $1,200 buy the other half. If I had $3,000 to invest in gold I would buy physical bullion. With less than $3,000 I’d go with Goldmoney.

Goldmoney is a fantastic and low cost way to buy and store physical gold.

Silver is no slouch either. This metals used for electronics, industrial applications, jewelry and medicine is up over 23% year to date and the drop from the year highs of $20.75 down to $17 also presents a great buying opportunity in my opinion.

From a technical perspective $17 silver looks like a strong support level because it is the 30 day moving average and was a support (or resistance) level in April, May and June. 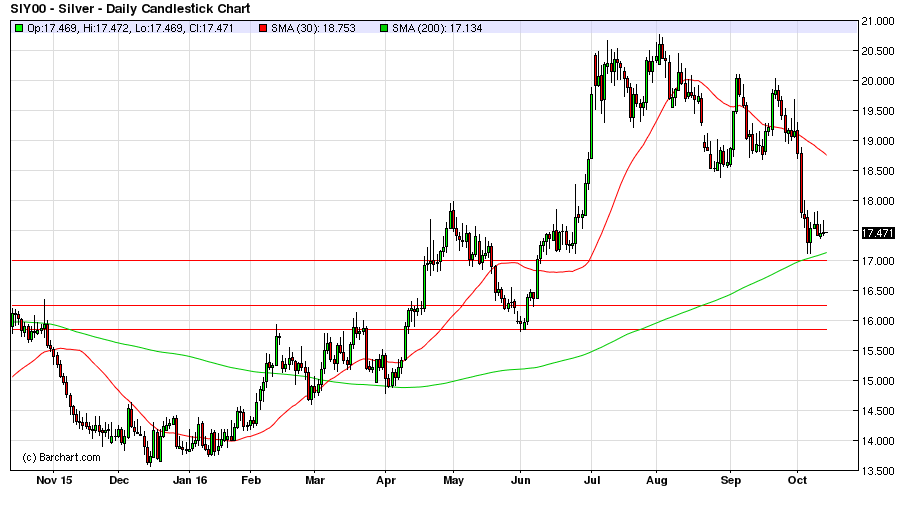 Waiting a few days to see if silver does break through the $17 support level or goes higher is a good idea. If silver does go down through $17 there could be support at the $16.25 level, but even stronger looking technical support appears at the $15.85 level.

The horizontal red lines are where I think the price of silver could find support. I think $17 could hold, but if not would likely retest $16.25 and/or $15.85.

Gold and silver are long term hedges against central bank recklessness and currency devaluation. I own these precious metals with a 5-10 year (or longer) outlook. I think a 10-20% allocation makes sense for my portfolio.

I’ve been wrong about gold and silver’s price moves plenty of times. I’m not encouraging anyone to go out and buy bullion without doing their own research and consulting their investment advisor.