Cash is Just One Tool in the Toolbox

I’ve written about negative rates (potentially) coming to the US and the importance of holding cash. I personally hold about 1 month’s worth of expenses in physical cash stored in a secure location outside of the banking system.

Why would I do this when I know that Inflation Destroys Dollars and that in the long term the value of fiat currencies goes to zero? When I’ve written articles like the above and Downfall of the US Dollar you know I’m not a fan of paper currencies.

Two main reasons why I want some cash:

2) Banks might impose capital controls, you’ll only be able withdraw a certain amount of money (if anything) from your bank account in the form of cash. That’s because the natural response when a bank imposed negative rates is to withdraw cash to avoid having your money taken.

Keep in mind that cash is just one tool in the toolbox. There are other important tools as well.

Tools like precious metals, cryptocurrencies (even though I’m a bit skeptical of this tech as investment pun intended), value stocks, real estate, options, the list goes on. 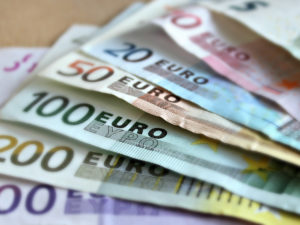 I reside in the US so I think in terms of dollars, but there are a variety of countries where I think holding physical cash would be a good idea. Negative rates have already come to Japan and parts of Europe.

Keeping a months worth of income in physical cash is something I’ve determined is a great way for me to protect my wealth, but it’s not all I’m doing.

In fact my physical cash holding is a small percentage of what I do. I withdrew some cash in $20’s (larger bills like the $50 and $100 are not right for me since some places won’t take them) over a period of time and I don’t think about it anymore (except to write some articles).

Holding cash is a defensive strategy that I do just to be able to buy gas and groceries in the event of negative interest rates, capital controls or natural disasters.