I favor gold over Bitcoin as a long-term store of value.  I do think that blockchain technology is here to stay for a long time. However, I question the long-term viability of Bitcoin.

But before I get into that I want to say that if someone loves Bitcoin and hates gold they are free to own Bitcoin and no one will force them to own a single gram of gold! The opposite is also true. You can also own some combination of both!

For me, I’ve chosen to own much more Gold than Bitcoin but I still own both.

I do think having a very small percentage of my assets in crypto currency is appropriate for me but I’m leery of having too much of my net worth in cryptocurrency.

So with that in mind I present gold versus Bitcoin. This is a comparison between the two as I think of it. What you value or find important will likely be different.

That is the great thing about free markets: there doesn’t have to be one answer that is forced on everyone.

Bitcoin has Advantages over Fiat Money

Dollars (and other fiat money) are constantly being devalued and destroyed via fractional reserve banking and central bank debt monetization and money “printing”. The total number of Bitcoins that will ever exist is set by how the bitcoin algorithm is coded.

It is Centrally Controlled

A disillusioned insider I came in contact with has swayed me to the opinion that Bitcoin is not decentralised. The decisions about Bitcoin are made by the Bitcoin Foundation and a few of the larger miners. 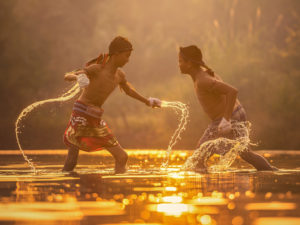 Even if Bitcoin is valued for direct use I think that value is very low. Dollars have some direct use value as well, for example kindling, tacky wallpaper, etc, but it is a fraction of the value dollars currently command in trade.

The reason I think this is a problem is because the direct-use value (aka non-monetary use value which is also sometimes called “intrinsic value”) provides a floor.

Government fiat currencies and Bitcoin have little (or zero) direct-use. So when these mediums of exchange fall out of favor, they can go to zero or near zero.

Bitcoin Could be Replaced by a Better Cryptocurrency

Bitcoin has some issues in my opinion. Bitcoin could be improved to overcome those issues, but it is also possible one of the myriad of alternative coins (called “altcoins”) could become more popular than Bitcoin and eventually replace what is currently the most established and largest cryptocurrency.

Virtually all vendors require a certain number of confirmations after Bitcoin is sent before it is confirmed and is considered successfully sent. This is to avoid the problem of double-spending.

Bitcoin takes about 10 minutes per confirmation. In the world of the internet, 10 minutes is a long time. Some vendors require 2 or 3 confirmations, which would take between 20-30 minutes. That is a really long time.

There are also concerns about the scalability of Bitcoin.

There are probably other reasons that haven’t even been invented yet that could make some new Bettercoin™ a superior choice to Bitcoin.

Which means it’s taxable as a commodity.

Just because the government decrees that something is the case doesn’t mean that it is true.

Various elements of the US government can say that dollars are a store of value but that doesn’t mean they are.

I can disagree with the CFTC intellectually. But I obviously can’t ignore what the government says if I don’t want to get fined or go to jail.

Like most Americans I’m afraid of the Internal Revenue Service (IRS) so compliance with all appropriate tax laws is very important to me.

That means that every time I transact in Bitcoin I have to keep track of my cost basis and pay any appropriate capital gains.

Mt. Gox, Bitfinex, and countless other exchanges have been hacked. You have to be kinda savvy to secure your Bitcoins. Plus, if you go the cold storage route you lose may of the benefits of Bitcoin as a medium of exchange.

Gold isn’t used as Money or a Medium of Exchange

Few if any retailers will accept gold as payment for goods and services. One must first convert the gold into money and then spend the money.

Gold is not considered a currency and like Bitcoin does not get favorable tax treatment.

It could be Confiscated

The United States government has made gold bullion ownership illegal in the past and could do so again. Therefore any gold held in the US is susceptible to confiscation. I think it is unlikely this will happen again because not very many people own gold bullion, as compared to years past, but this is a possibility.

You Can’t use it to Buy Stuff Online

I can’t get onto Overstock.com and use physical gold in my possession to buy goods or services. What that would look like would be to mail in a shipment of gold, Overstock would wait until the gold arrives, and then ship out what I ordered.

I think the Paper Gold Markets are Manipulated

I think governments have a vested interest in keeping the price of gold down. I think the gold futures markets are manipulated down. While I think that this manipulation is not sustainable and eventually the price of gold will reflect supply and demand fundamentals, it is annoying in the short term. On the flip side, gold manipulation does provide a lot of great buying opportunities.

Despite all the changes since 1,000 B.C. gold is still valued by billions of people.

It has Significant Direct-Use Value

Gold is used in electronics, jewelry, dentistry, satellites, and decoration. Even though gold is not used as money or a medium of exchange today it is still valued by billions of people.

How many people would want US dollars if they weren’t used as money?

Gold is one of the least reactive chemical elements. Gold that has been lost on the ocean floor for hundreds of years is still in the same shape it was when the ship went down.

Gold is durable, portable, scare, divisible and uniform. Gold can act as a unit of account, a medium of exchange and a store of value.

A new element that has all the properties of gold is unlikely to be discovered or created.

Mining gold-rich asteroids would also be tremendously expensive and dangerous.

Gold can be used with Payment Technologies

Much of the below thought is from or inspired by Roy Sebag. Mr. Sebag makes a distinction between money technologies and payment technologies.

Credit card networks, Paypal, Apple Pay, Bitcoin, and Ether are examples of payment technologies. These are networks and systems that allow ownership of assets to be transferred.

Buying things online with a credit or debit card, Goldmoney, Paypal, or Bitcoin is simply ownership transfer of an asset via a payment technology.

In the case of credit cards, the credit card network is the payment technology and dollars are the money “technology” or asset being transferred.

In the case of Bitcoin, the Bitcoin blockchain is the payment technology which also has an integrated and inseparable unit of account, also called Bitcoins.

Gold can be used separately from a payment system (physically exchanged), or it could be used in conjunction with another payment system.

Goldmoney is one such service that combines physical gold ownership storage and transfer with the payment technology potential of internet based transactions.

Gold remains a fantastic store of value. I think the best of both worlds in money would be a gold-backed currency or electronic ownership transfer of Gold held at a trusted third party.

Bitcoin has a very low (if any) direct-use value. That fact combined with the potential for Bitcoin to be supplanted by a superior payment technology makes me skeptical of Bitcoin as a long-term store of value.

I like gold because it has a 3,000 year history of being valued across cultures. It’s scarce and I think it’s extremely unlikely that another element will come along that will be able to replace the desired and historically valued properties of gold.

Not only that, but you can still make payments and spend gold in a way that takes advantage of the electronic payment systems that are so useful today.

Ultimately investors and consumers will make their own decisions. Gold and Bitcoin are competitors but they could also continue to exist side by side for some time.

That is just how gold and Bitcoin compare in my view. Which one do you prefer? Let me know in the comments section below!