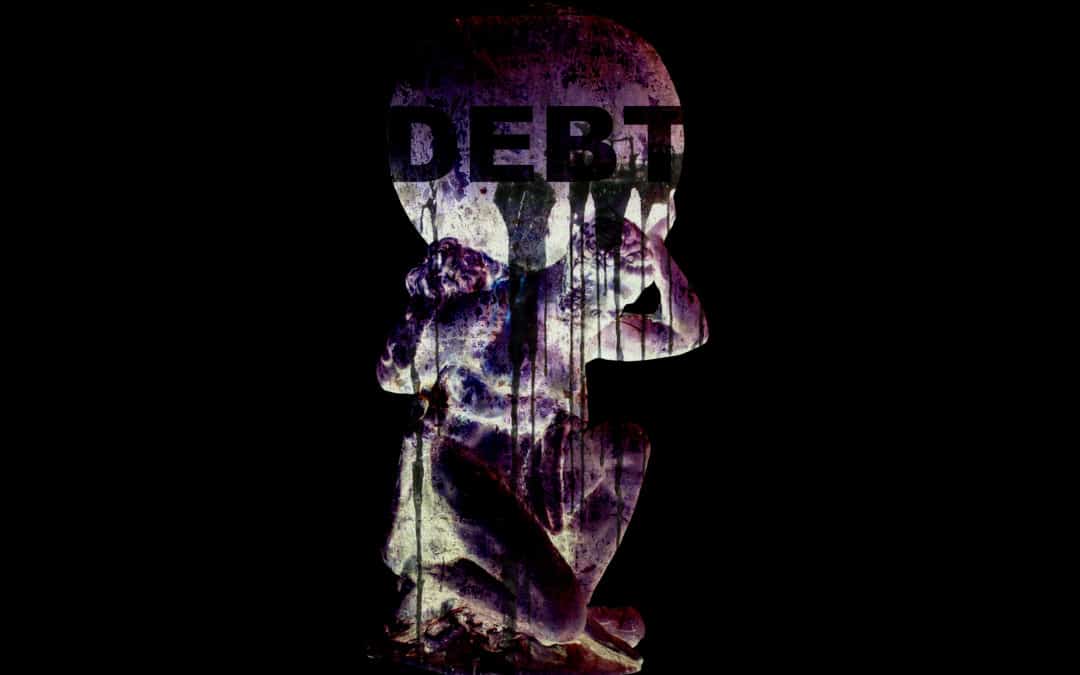 There is faulty wiring running throughout the US economy and economy at large. Previously I wrote about how the real economy is weak, pointing to stagnant wages and a low labor force participation rate.

Today I’m going to talk about how debt at the federal, state and personal levels are unrepayable.

Debt at the Federal Level is Unrepayable

Not only is this debt impossible to repay but it continues to grow with little chance that this spending will subside until it has to.

But the vast majority of expenses was in areas that simply will not be cut.

The United States spent $910 billion on Social Security, $588 billion on Medicare, $368 billion on Medicaid, and another $563 billion on other mandatory spending which includes items such as Federal employee retirement programs, SNAP (food stamps) and Veteran’s Benefits. So total “Mandatory” spending was $2.4 trillion. These are the kinds of programs that will never be voluntarily cut by any congress and in the case of Social Security and Medicare, will only go up in cost as more people retire.

Not only that, once you factor in interest on the $241 billion in net interest paid on the national debt (another item that congress won’t cut because it would tank the credit rating of the United States) total spending rises over $2.6 trillion. Considering congress keeps borrowing and that interest rates are rising these borrowing costs will only continue to rise.

This leaves $630 billion left to spend.

But $584 billion goes to the military. Which leaves $36 billion left. However in 2016 the US Federal Government spent an additional $600 billion in discretionary money.

Neither side will cut Social Security or Medicare.

There a Fiscal Crisis on the Horizon

The $20.49 trillion in “Total Public Debt Outstanding” does not include unfunded Social Security and Medicare obligations.

The 2017 Social Security and Medicare Boards of Trustees report has again stated that these programs are underfunded. “The Trustees project that the combined trust funds will be depleted in 2034, the same year projected in last year’s report.”

The Trustees cite an increase in baby boomer retirees drawing Social Security and Medicare and fewer workers paying into the system.

How will the United States Federal government make up the difference between the benefits promised to be paid out and a depleted “fund”? In reality there is no “fund” and the money from payroll taxes goes into the general budget. Lawmakers only have a few options to “save” Social Security and Medicare: some combination of raising taxes and lowering benefits (either by raising the retirement age or reducing the monetary value of benefits paid out). That is of course unless people start having a lot more kids who in turn have jobs and pay into the system.

The last option, which is really a way of lowering benefits in a dishonest way, is simply borrowing and or “printing” the money to pay the benefits.

But these expenses incurred in 2016 don’t include a multi-billion dollar bailout of some kind, funding a new war or some other large, unforeseen expense. So what would happen to the Federal debt if one of these events occurred?

Debt at the federal level will continue to climb.

Debt at the State Level is Unrepayable

I grew up and lived in Illinois for most of my life. It is just about the most indebted state in the United States, surpassed only by New Jersey.

Illinois only had enough revenue to cover 96% of expenses in 2015. The Illinois government is more than capable of overspending in any circumstance, but the revenue shortfall continues to be exacerbated by the state population decline. A total of 114,144 residents moved out of the state in 2016 and new residents plus births could not offset this exodus. The result was the count of Illinois residents dropping by 37,508 people in 2016.

While Illinois can issue debt and for some reason their debt continues to be purchased, their financial risk means the cost of borrowing is high and without a central bank they aren’t able to drive down the cost of borrowing or print currency. Not that those strategies work in the long term, but they don’t have those tools to delay the pain.

I choose to single out Illinois since they spent years of my hard earned tax dollars so recklessly but many other states are in bad shape as well.

Overall state pensions are underfunded by a total of between $1 trillion to $4.3 trillion depending on how well you think the pensions will perform.

Despite years of economic “recovery” since the 2008-2009 financial crisis these problems have only gotten worse. With this “recovery” getting long in the tooth, what will happen when the economy officially slips back into a recession?

Debt at the Personal Level is Unrepayable

Some of the most indebted people in the United States are also some of the least capable of repaying it. I’m talking about former college students. According to Lendedu.com there are over 45 million individuals in the US with student loan debt. The default rate is 11.5%.

A study by Nerdwallet.com indicated the average person with student loan debt owes $46,597 with a total owed of $1.36 trillion.

So there are 45 million people in the US that have a considerable amount of student loan debt.

These are these are the same people who will presumably have to shoulder the burden of the $20 trillion debt and accept delaying retirement or paying more in taxes to pay for baby boomer’s retirement and medical cost.

US consumers owed $1.21 trillion in auto loans in 2017. Unlike student loans (in which theoretically you borrow money to increase your purchasing power for the rest of your life) or mortgages used to buy a house (which can theoretically go up in value), auto loan debts are taken out on an asset that rapidly depreciates.

While I am sympathetic to people who have to use a credit card to pay for the basics of life such as food or utilities–credit card debt is a horrible form of debt.

Credit cards are primary used to consume and they carry high interest rates. If you need to use a credit card to pay for something it is likely that you will not be able to pay for it later when it effectively costs more due to the credit card interest.

While housing can go up in price, it is not guaranteed to do so, as many people learned in 2008.

With many Americans burdened with debt and without savings the only way they can purchase a house is to borrow the money. As interest rates rise the cost of a mortgage will increase and therefore people will not be able to borrow as much, the result is that housing prices must fall.

Why Does this Debt Matter?

Debt, specifically debt to consume, does not grow the economy. It is a drag on the economy. The amount of debt in the United States will eventually crush the US economy.

Lets assume for a moment that consumption grows the economy even though it does not. If a debtor pays back the loan that means that is money that goes towards the person who loaned the money and not towards buying goods and service. Thus a person is not able to buy as much in the future when they are servicing a debt, all else equal. So even if consumption did grow the economy consumer debt can only pull consumption into the present at the expense of future consumption.

With wages stagnant and labor force participation rates at decade lows that does not bode well for Americans to be able to repay these debts.

Another problem is that the person borrowing the money might not be able to repay it, in which case the person who loaned the money will have to take a loss. This does not benefit the economy either.

The massive amount of Federal, State and Personal debt in the United States is a huge drag on the economy and is one of the biggest problems or “faulty wirings” that is coursing through the US economy.

My next article will be about one of the last main areas of faulty wiring in the US economic house: an overvalued stock market.

I’m not all doom and gloom. Far from it. I think there are tremendous opportunities to grow and protect your wealth through alternative investments.