Dollars are the Ultimate IOUs–For Now

I wanted to flesh out the idea that my Caribbean Cruise was a microcosm of the global economy.

One problem with this arrangement, at least for the people of the world who aren’t US citizens, is that the US dollar is no longer backed by a solvent and productive economy.

Another problem is that a lot of the loans American use to acquire dollars are provided by the very countries who also provide the goods and services.

In other words what are these countries getting in exchange for providing goods and services? IOUs.

These IOUs are promises to pay from a group of people and a country that has more debt that any country or people in the history of finance. 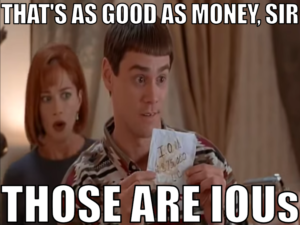 In the movie Dumb and Dumber, main characters Harry and Lloyd spend hundreds of thousands of other people’s money. But hey, they kept IOUs so they could pay them back! (both were unemployed)

So what will happen?

This has been happening for a while, but people still have faith in the dollar and the other fiat currencies around the world are being devalued by their respective government even faster than the dollar.

So dollars are the cleanest dirty shirt.

But will this continue forever? Will Americans be able to continue to borrow at low rates and live beyond their means while the rest of the world foots the bill?

The US dollar is the world reserve currency which means that many things that are traded on the global market are priced and bought and sold with US dollars.

It also means I was able to buy a Hawaiian shirt in Honduras, go snorkeling in Belize and buy drinks in Mexico at a low cost using US dollars.

Using China as an Example

Why do countries put up with this lopsided arrangement?

It has everything to do with history and perception. I touch on this some in another article downfall of the US dollar. But the short version is that the US was the most powerful and dominant country after World War II and the currency reflected this strength.

The result was that critical goods like oil were priced in dollars. 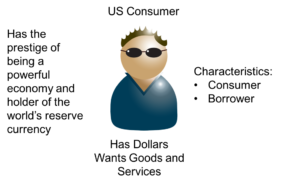 So in order to get dollars China produces goods and services that are then sold to Americans for dollars.

Back when the majority of Americans had a lot of savings and the dollar had more value this worked fine.

But the US began producing less while simultaneously consuming more resulting in trade deficits.

You can’t consume more than you produce (which is what a trade deficit is) without losing money and as time passed the US consumer found his savings depleted. 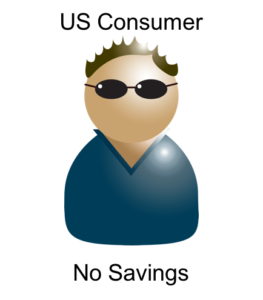 About half of Americans have zero net worth.

But China has an large portion of it’s economy built around American consumption and the world associated dollars with strength and prosperity.

This works for the time being because the US is the most powerful economy in the world and the dollar is the world reserve currency.

So of course the American will pay back the Chinese producer! Or so the thought goes.

Meanwhile the US government has also taken on monstrous amounts of debt and has devalued the dollar.

So the IOUs the Chinese producer already has are worth less and less each year.

How long before the Chinese producer begins to seriously doubt if the US consumer will ever pay back the IOUs?

Once this doubt takes how long before the Chinese producer stops providing the loans to buy the goods and services? 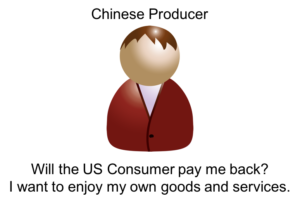 When this happens prices will have to rise and it will be harder for Americans to buy goods and services.

This process is explained in more detail in an excellent book that I recommend. The book is written by Peter Schiff and is called “How an Economy Grows and Why It Crashes 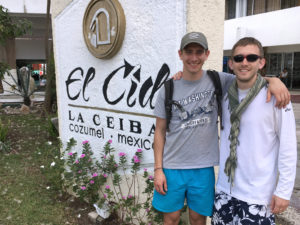 Two beers, four mixed drinks and chips and salsa for under 20 USD. Compliments of El Cial La Ceiba in Cozumel, Mexico. It wasn’t just the two of us imbibing though!

This is basically what I was witnessing on my Caribbean Cruise.

I was able to spend my higher valued US dollars for goods and services provided by peoples outside the US who wanted dollars.

It is a great benefit that Americans have had for some time but will it continue forever?

I don’t think it will.

I think there are lots of opportunities to position oneself to avoid getting destroyed as the dollar continues to lose value.