Imagine if you will your fairy godmother appears and you’re given the opportunity to backdate one trade to five years ago.

You’re given 1,000 dollars and you’re presented with three investment choices.

For each option she tells you the annual gain or loss as well the average return:

Now your fairy godmother told you the average annual return for each is 10%. So, one might be tempted to assume each investment will perform the same!

But you don’t get average returns so this number is not particularly useful.

You want to choose the one that has the highest total return. Total return is just a fancy way of saying how much an investment went up (or down) from it’s starting value.

So you’d take the starting amount, $1,000, and add the gain or loss from the first year, second year, etc, and see how much the $1,000 is now worth after five years. The percentage increase from the original value to the ending value is the total return.

Investors typically want to know how an investment tends to perform each year. A useful way of seeing how an investment does each year in a way that smooths out up years and down year that is more useful than average returns is the Compound Annual Growth Rate (CAGR).

CAGR is calculated as follows:

I’ve calculated the CAGR for you below.

So if the fairy godmother had provided the CAGR; it would have a been a useful number to determine which investment had the highest total return.

Why Do fairy godmother’s overcomplicate things? 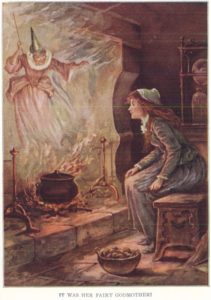 Why wouldn’t your fairy godmother just give you an even $1,500 and call it a day?

Cinderella‘s fairy godmother gave her until midnight to get back home. Why didn’t she give her a year to get back or just make the pumpkin turn into a carriage permanently?

Why weren’t the slippers made out of something more comfortable and durable than glass?

Cleary there is NOT a precedent for the pragmatic or straightforward. So don’t ask me to explain how fairy godmothers operate. But lest I upset the fairy godmother community I think the principle of don’t look a gift horse in the mouth also applies. After all, she’s hooking you up with the ability to backdate a trade.

You don’t get the Average Annual Return

While not without it’s limits, the compound annual growth rate is much more useful than average returns and it is something to keep in mind when evaluating an investment.

Average returns tell you very little while the compound annual growth rate shows you which investment would have had the highest total return.

You Don’t Get Average Returns

Let’s illustrate this point with a simple example. Lets say you invest $100 and the investment loses 50% in year 1. Then in year 2, the investment goes up 50%.

Your average return is 0%.

But how much would the investment be worth?

What would it look like if you Did get the Average Return? 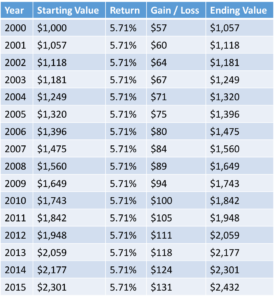 But if you invested in the S&P 500 during that same timeframe you would not get the returns of 5.71% compounded annually.

This illustrates the power of compounding interest over time. Over 15 years this theoretical investment went up 143%.

The Return You Would Actually Get 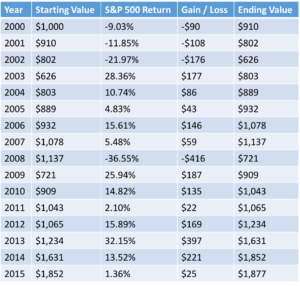 The reason being that if an investment goes down, as the S&P 500 did 4 out of the 15 years during this period, it must go up by even more to make up for the losses.

It’s also worth noting that in order to get the $877 gain one would have to have held onto the investment through three consecutive years of losses over 9% and a 2008 drop of over 36%.

That would take an iron will.

The typical human reaction when faced with such losses is to sell to avoid further losses.

Why does the Financial Industry Use Average Annual Return?

The Vanguard 500 fund (VFINX) lists a 6.58% average annualized return over the past 10 years. If you really got 6.58% compounded each year the investment would roughly double in ten years, but this fund only went up about 50% over that timeframe.

The main reason the average annualized return is used is probably because it makes the return of a fund look better than it actually is. Compound Annual Growth Rate (CAGR) would be a more useful and frankly honest metric because that is the rate an investor actually gets. 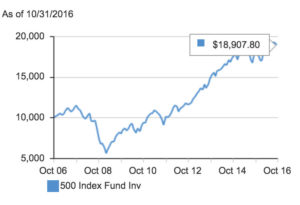 I’m not trying to single out Vanguard. I think Vanguard is a good company but average annual performance is deceptive. And the chart on the right showing the hypothetical growth of $10,000 is also deceptive.

How Much Gain is Required to Recoup a Loss? 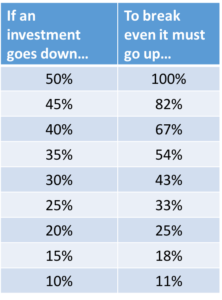 The problem with losses is that when trying to make them up and get back to even you are doing so with less money.

Not surprisingly, the greater the loss, the greater the gain needed to make it up. With smaller losses the gain only has to be slightly larger to get back to break even. However, with larger losses, higher and higher multiple gains are needed to recoup the losses.

The moral of the story is that 1) you won’t get the average return for an investment, so when you see an average return listed for an ETF or Mutual fund, you can ignore it, it’s not a useful number 2) when an investment goes down in value, it is costly.