Sanity in an Insane World

I’ve written about problems with the United States dollar and the US economy.

I’ve been influenced by folks like Peter Schiff and Simon Black. To say the least these guys are not bullish on the US economy. I think they’re right and I think it’s wise to listen to what they say, be aware of the risks, and determine what course of action makes sense for your unique situation.

But while things aren’t great, particularly for those on fixed incomes without assets or investments, there hasn’t been a significant stock market correction and the US dollar is still relatively strong. Does that mean that people like Peter Schiff or Simon Black are wrong? Does that mean I’m wrong?

Things aren’t getting better. The underlying problems remain and only get worse. Governments have tremendous debt, interest rates are distorted, governments continue to spend recklessly, central banks are out of control and asset prices are inflated.

In the face of these problems I think there are two mains risks when it comes to behavior that fall on opposite ends of a spectrum. To willfully embrace either of these mindsets and their resultant behavior is, I think, crazy.

The First Kind of Insanity: Doing Nothing

Proud as a Peacock

On the one hand there is a person who does not take the risks seriously because they don’t think there are any significant risks.

People with this mindset believe that the United States can manage it’s debt. They laugh at anyone who suggests the recovery isn’t real or that the stock market growth isn’t based on sound fundamentals.

Subscribers to this attitude think the United States is the richest and freest and greatest country in the world and that $20 trillion in debt and trillions in unfunded liabilities is not a problem. They think the US government can just print money or increase taxes or grow the economy and everything will be fine.

Folks with this type of attitude hold their savings entirely in dollars and US-centered assets. They are comfortable being heavily invested in US stocks. They believe that government promised programs will be there for them when they most need them.

They can’t envision a world in which the United States isn’t the dominant world superpower. They can’t imagine the US dollar not being the world reserve currency.

This mentality is common in those who are blissfully unaware of the lessons of history and the facts of math.

This is the peacock mentality. People with this mentality strut around and deny there are any problems and so do nothing to protect themselves.

Similar to the peacocks of the world there are people who realize there are problems with the economy but still choose not to do anything about it. Maybe they think there isn’t anything they can do about it. They think if the dollar falls and the stock market crashes then they have no choice but to go down as well. They’re either unwilling to learn about alternatives or simply don’t think alternatives exist.

They also might willfully ignore anything suggesting there are problems. If pressed they would concede that another 2008 or 2000 crisis are possible and that government debts won’t be repaid, but they really don’t want to think about it.

People with this type of attitude don’t have the misplaced confidence of the peacocks but they make the same choice not to take any decisive action to protect themselves.

They stick their head in the sand. This is the ostrich mentality.

A Second Kind of Insanity: Living Life around Anticipation of Crisis

But at the same time I think there is a risk of having a bunker mentality. This attitude that crisis is imminent and the sky will fall any day now. Individuals who think this way might go 100% into cash. Or go 100% into gold. Or go 100% into guns and food. Or they take huge risks trying to short the stock market. 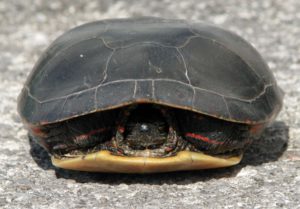 A Turtle in it’s Shell

But I think this attitude of going into one’s shell is not particularly helpful. It’s hard to accomplish anything or live a fruitful life when you’re hunkered down and metaphorically looking over your shoulder all the time. This is the turtle mentality.

Aristotle and the ancient Greek philosophers spoke of a golden mean. The idea that the correct course of action or virtue is the middle path between two extremes. For example, courage is the golden mean between recklessness and cowardly inaction.

The key to sanity in an insane financial world is decisive, measured and purposeful action when it comes to preparation. Two extremes when it comes to investing would be on the one end of the spectrum shorting the S&P 500 with one’s life savings. On the other end would be buying a 3x bull S&P 500 ETF.

But just because I believe US stocks are in a bubble doesn’t mean I’m going to go with the extreme of shorting the market. It does mean that I’m going to limit my exposure to US stocks and be very selective about which stocks I own.

When it comes to dollars the two extremes would be 100% in dollars or 0% in dollars. But just because I think dollars are overvalued and will continue to lose value doesn’t mean I have to go to the extreme of 0%. It doesn’t mean I go 100% into gold or I only own precious metals and cryptocurrencies. I actually advocate holding some cash. Emphasis on some. I also earn money in dollars and invest in value stocks.

This applies to attitude as well. Being negative and pessimistic isn’t going to do anyone any good. Thinking everything is awesome and always will be isn’t a very good approach either. But there are still many great businesses in the US and there is lots of opportunity in the United States and in the world.

The United States has problems. Lots of economies around the world have problems too. There are going to be winners and losers. Many promises that have been made will be broken. But in the midst of all this there is tremendous opportunity. The important thing is to remain calm, take some practical steps to protect yourself and live your life.