The Inflation Bandit Stole Half Your Money

by John | Jul 17, 2016 | Preservation of Purchasing Power, The Inflation Bandit

If a frog is placed in boiling water, it will jump out, but if it is placed in cold water that is slowly heated, it will not perceive the danger and will be cooked to death.

– Motto of the Inflation Bandit

There is a thief called the Inflation Bandit. He steals YOUR money every year. The ‘Bandit has been robbing and plundering since 1913. He has never been caught and he has never been stopped.

The Inflation Bandit Stole Half Your Money Since 2000

He is a terrible scoundrel and has robbed Americans of millions and billions of dollars but he’s also clever in an evil sort of way.

He doesn’t break into banks and steal money directly–after all that would be dangerous and he’d be caught.

How the Inflation Bandit Operates 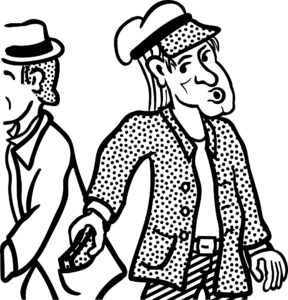 The dastardly Inflation Bandit just prints up new money that looks exactly like all the other real money and spends it.

By spending his fake money into the economy he causes prices to go up for everyone else.

So while he doesn’t take your money directly he accomplishes the same thing by stealing the purchasing power of your money.

If the Inflation Bandit finds a car he wants he prints up fake money and uses it to buy one for himself and maybe even a few for his friends.

He buys up enough cars so that there aren’t enough left on the lot for all the people with real money to buy one.

When buyers can’t get what they want they tend to get upset. They complain to the car dealer. “I want to buy one of those awesome new cars but you’re sold out! Get some more ordered from the manufacturer!”

So when the car dealer orders more cars from the manufacturer, the dealer thinks, “Hey, people really love these cars! I bet I can raise my prices when I get more. That way people who most want the cars will be able to get one and I’ll make more money.”

Plus the dealer doesn’t like it when his customer’s come in and complain because he doesn’t have cars available for them to buy.

So now the price is higher for people who still want to buy a car. Because the Inflation Bandit used his fake money to buy cars he effectively stole from people who now have to pay the higher price for a car.

It’s really not the car dealer’s fault he sold the cars to a thief. He didn’t recognize the Inflation Bandit. The ‘Bandit wears many disguises and his fake money is indistinguishable from real money.

And it isn’t like once the Inflation Bandit spends his fake money it is gone. That fake money is now mixed into the economy and bids up the prices of everything else.

The Inflation Bandit gets slowed down

Back in the late 70s the Inflation Bandit got especially greedy and printed up a lot of fake money. This was causing prices to go up by over 15% per year!

The ‘Bandit got away with it for a few years but people were outraged.

The government cracked down on his efforts and by the mid 80s he was on the run and printed less of his fake money so prices rose by about 5% per year.

Not a bad take for this master thief. He was still stealing millions upon billions but people were less concerned when prices rose by 5%. After all they had been accustomed to prices rising by 15%.

The ‘Bandit learned his lesson

The Inflation Bandit knows if he prints too much fake money people will be outraged. People will demand he be stopped or at least slowed down.

So he’s gotten smarter and he’s gotten patient. He knows that as long as he doesn’t create too much of his fake money each year most people won’t notice it and people won’t be motivated to stop him.

He has a good chuckle every time a business gets blamed for his crimes.

Have you heard of Price Inflation?

In the egg example that is a 7% average annual inflation rate.

Since the year 2000 I believe price inflation causes your money to be worth 5% less per year on average. This means when you try to buy things from food to gas and yes even electronics like iPhones and computers you’re paying 5% more each year than you otherwise would have.

Another Way to Understand Price Inflation

You would be able to buy less than half as much stuff! That means you’ve lost over half your purchasing power!

Imagine if you woke up one morning and someone had stolen half of your money. If you’re like me you’d be outraged. You’d call the police and demand justice.

But because inflation causes money to lose value relatively slowly over time it’s harder to notice.

People have had half their dollar’s value stolen over the past fifteen years and few people complain about it.

Like the proverbial frog in water, if the water is heated slowly enough, it will not jump out and be boiled alive.

Most people don’t think much about inflation and they don’t care. But if you buy things using dollars you’re being robbed blind by the Inflation Bandit.

There are ways to protect yourself from inflation thievery but you first have to realize you’re being boiled.

If you’d like to hear about the ways I put the beatdown on the Inflation Bandit click here.