How not to Fear Missing Out on the Cryptocurrency Craze 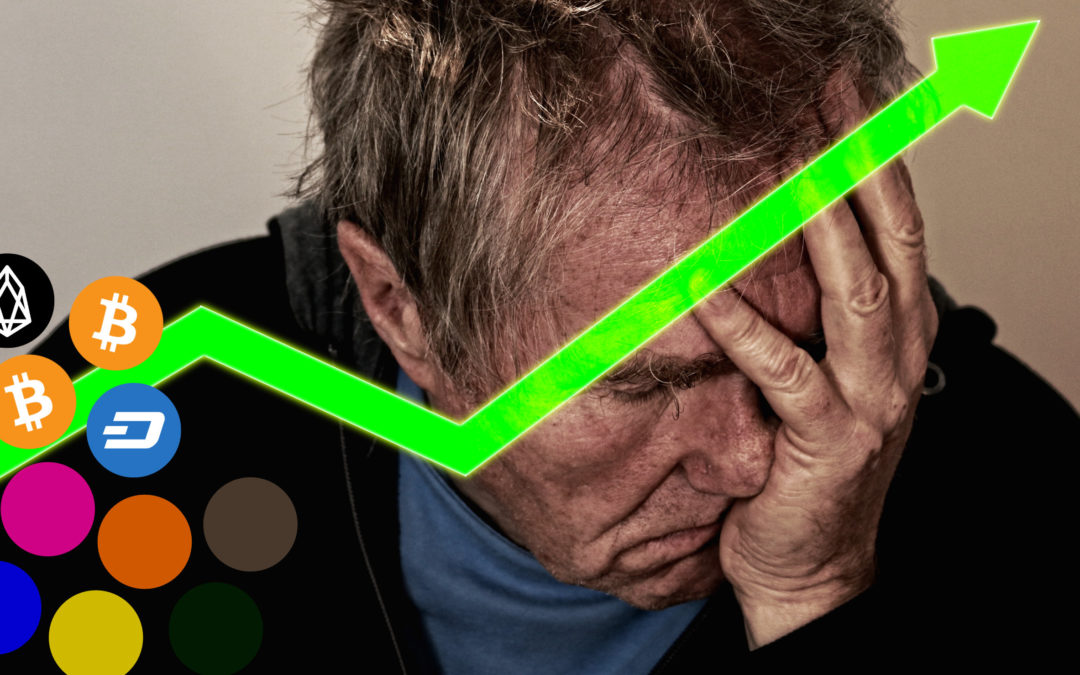 One Bitcoin is currently trading north $8,000 as of writing. The total market capitalization of all cryptocurrencies is over $240 billion.

Since 2013 BTC has gone up, up, up thousands of percentage points. 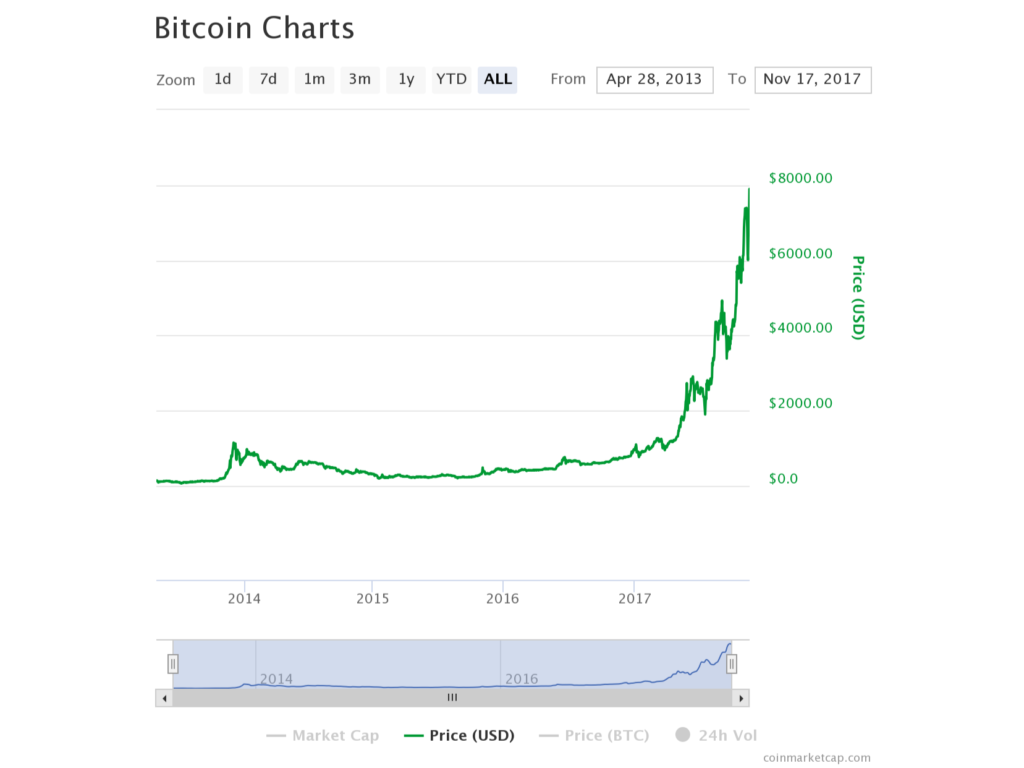 Cryptocurrencies like Bitcoin have made millionaires. An entire industry that didn’t exist ten years ago has a market capitalization of hundreds of billions.

Much of the focus of this website is in alternative investments. I think the stock market is overvalued and a lot of the financial products peddled by wall street are bad deals, at least for customer. The alternative investment du jour is without a doubt cryptocurrencies more specifically Bitcoin, which as of writing is trading northwards of $8,200.

Are you afraid of missing out on the cryptocurrency craze? There a couple ways to squelch this fear.

Option A: Don’t Own Any Cryptocurrencies

But I’ve decided to make a different choice.

As I’ve said before I’m personally skeptical of cryptocurrencies as a long term store of value. I also think there are superior alternatives.

But the market has continued to grow and a lot of people think it is the next big thing. They compare it to the “dot com” boom that took place earlier in the century (there was also quite a bust if I remember correctly). I was skeptical of Bitcoin when it was $1,000 and $4,000 and I’m skeptical of it now that it’s over $8,000.

Option B: Take a Measured Approach

Bitcoin could continue to climb to the moon or it could go to zero. It could also do both.

Being on the sidelines and watching cryptocurrencies climb higher and higher is difficult. People like to buy things as they are going up. But buying out of fear of missing out is a horrible idea that will in all likelihood results in bad decisions and losses.

The nature of digital technology is that it becomes obsolete and is replaced by newer, better technology.

I don’t know the future. That is just my opinion and my best, most reasoned judgement of the technology and the facts as I understand them. I know I could be wrong.

So I own some cryptocurrency so that I’m not on the sidelines and I am benefiting from the rise in price. But I only own what I can afford to lose.

Is Bitcoin the Google or the Next HotBot.com?

If you’ve never heard of hotbot.com that is exactly my point.

Is Bitcoin the next Facebook, or is it the next MySpace?

I do think that from a technology perspective there are many other coins and cryptocurrencies that I think are superior to Bitcoin. I know that when I’ve tried to use Bitcoin as a medium of exchange it stinks. It’s expensive, especially when the network is busy, and it takes a minimum of 10 minutes, and usually 20-30 minutes.

There are other cryptocurrencies that are faster, more anonymous and more secure.

Bitcoin is lousy for payments and attempts to make it better have thus far not come to fruition.

Maybe it will be better for payments in the future. Or maybe, as some people argue, Bitcoin doesn’t need to be used to day to day payments, that it can just be a “store of value” like gold that doesn’t change hands very often.

I can’t foresee the future but I do see benefits in cryptocurrency technology. But at the same time this technology is, in my opinion, very difficult to value.

Fortunately I don’t need to know.

As I said before, no one needs to own cryptocurrencies. It’s a personal choice. But I don’t want to sit on the sidelines in case cryptocurrencies are the “next internet” or “next radio”.

So what are some details of this option?

How not to Fear Missing Out on the Cryptocurrency Craze: A Strategy

Part 1: Only buy what you can Afford to Lose

Cryptocurrencies are highly speculative and highly volatile. That is why I think it is very important to only purchase an amount of cryptocurrency you can afford to lose.

For example, I bought about .5 BTC on Coinbase at $7,000 before the Bitcoin segwit2x fork (which didn’t happen). I intended only to hold it through the segwit2x fork. I then watched as BTC fell to $6,000, representing a $500 loss. But because I had only bought what I could afford to lose I was able to hold through that dip, and when Bitcoin rallied back to mid $7,000 I was able to reduce my position at a profit.

If I had bought more than I could afford to lose, it would have been harder not to panic and sell to cut my losses.

If cryptocurrencies become mainstream and go up another gazillion percent, you won’t need to own that much of any one to make a handsome profit. There are over a thousand cryptocurrencies with a market capitalization over $244 billion. Of that $244 billion Bitcoin accounts for the lion’s share, at $140 billion and the top ten account for nearly $220 billion, or about 90%.

Some are going to go to zero and disappear, others might stagnate, and still others might continue to go up in value and over the next 20-30 years and represent a great speculation.

By owning a handful of the more promising cryptocurrencies, one increases the likelihood of owning one that really takes off.

If I had kept all the Bitcoins I bought several years ago, and sold them today, I would have made somewhere around $45,000. If I had kept holding them who knows how much they would be worth in the future. Instead, I’ve bought and sold Bitcoins and other cryptocurrencies over the years and probably made a few thousand instead (I’d have to check my tax returns to know for sure).

Throughout that time I’ve held some cryptocurrency and it has steadily gone up. One of my mains goals with cryptocurrency was not not lose money and I’ve succeeded thus far in that goal.

Is your goal with cryptocurrencies to try to pick the top? Is it to double your money and get out? Is it to buy and hold until Bitcoin goes to $100,000?

Because cryptocurrencies are so volatile right now I think it’s good to have a goal and then exercise the discipline to follow it. Decisions made based on emotion tend not to consistently work out.

If you decide speculative risk is right for you, you can buy Bitcoins on Coinbase.