“GoldCore are one of the leading gold brokers in the world, serving clients in the U.S. and over 45 countries internationally.”

I receive no compensation for reposting this article. I thought it was valuable and want to share it with my readers.

By Mark O’Byrne – 15 December 2016 – From the Goldcore Blog, reposted with permission

The Federal Reserve increased interest rates by 0.25% as expected yesterday leading to gold falling to lows last seen in February 2016 and the dollar rising to its highest level against the euro in 14 years.

Gold actually settled higher at $1,163.70 for the day yesterday. However gold futures slid to $1,156.70 an ounce in electronic trading on the rate decision at 1400 EST and soon gold was pushed down 1.3% to 10 month lows after the decision in less liquid after hour markets.

Yellen announced a 0.25% increase in the benchmark rate to 0.50-0.75% as the Fed raised interest rates for the first time in a year.

The Fed signalled more rate hikes in 2017 as expected and once again attempted to appear hawkish and suggested they would increase interest rates three times in 2017.

It is important to remember that they promised three rate hikes for 2016 this time last year. Only one rate hike materialised – yesterday’s rate hike. It is prudent to focus on what the Fed does rather than what it says.

The Fed has been promising higher interest rates most years since 2008 and yet there have only been two interest rate rises since 2008. Yesterday’s rate rise was only the second rate rise since the 2008 financial crisis. The Fed frequently adopts a hawkish tone which consistently fools many market participants who buy into it. 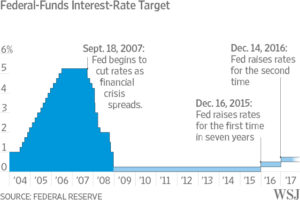 Similar price weakness and poor sentiment happened at the end of last year when gold had an intermediate bottom on the last day of 2015, December 31 at $1,062.25 per ounce (LBMA AM Fix). This was prior to very strong gains in January 2016 and in the first half of 2016.

Sentiment today is very similar to that seen at the end of last year. Part of the bearishness was because the Fed promised 3 rate rises in 2016. They managed just one – yesterday’s rate rise.

As the great orator, ex-President George W Bush once attempted to say:

From a long term investor, pension owner and physical buyers perspective, it is prudent to ignore the noise and focus on the fact that the Fed’s monetary policies, along with most central banks in the world, remains extremely accommodating.

However, rising interest rates per se are not negative for gold. What is negative is positive real interest rates and yields above the rate of inflation. This is unlikely to be seen any time soon.

Even if the Fed increases rates, interest rates remain close to zero not just in the U.S but in most major economies. Thus, there is no opportunity cost to owning the non yielding gold. Indeed there remains significant counterparty and systemic risk in keeping one’s savings in a bank and government bonds look like a bubble that is being supported by money printing and debt monetisation.

This period of ultra-loose monetary policies needs to come to end as soon as possible as debt levels are surging globally creating the real risk of a new debt crisis in 2017.

Gold is looking shaky in the short term and the technicals and momentum is on the side of the bears. This could push gold lower into year end, back to test support at $1,100/oz.

Today, after a near 50% correction in recent years, gold again has significant potential for substantial capital gains in 2017 and during the Trump Presidency.

For investors looking to diversify and hedge the significant risks facing us in 2017, gold is again at a very attractive entry point.