Bitcoin is not the Future of Cryptocurrencies

By market capitalization Bitcoin is currently sitting in the #1 position as the largest cryptocurrency.

There is something to be said for the network effect but Bitcoin has several fatal flaws that leave it vulnerable to being overtaken by newer and better technology. 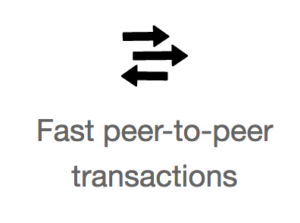 A screen capture from bitcoin.org. I don’t consider 10-30 minutes fast unless we’re talking about glaciers or the the average US bureau of motor vehicles

If I buy something digital online I want to be able to download it instantly.

Imagine buying a song on iTunes but having to wait 10-30 minutes to start downloading it. If Apple used bitcoin instead of credit cards that’s probably how long you’d have to wait.

Or what if you want to buy a latte on the way into work? Would you want to wait 10-30 minutes in the coffee shop before you can leave with your drink?

But why is Bitcoin so slow?

You need a Trusted Third Party to make Fast Payments

Websites like Overstock.com accept Bitcoin as payment. However, they do so by utilizing a trusted third party, like Coinbase, to serve as a middleman.

No doubt they do this to avoid the issue of double-spending, refunds and transactions taking thirty minutes.

But the fact that overstock.com uses a trusted third party pours cold water on the idea Bitcoin has “Fast peer-to-peer transactions”.

In addition to confirmations being slow, Bitcoin has issues with scalability of the network, or the number of transactions the network can process. There are competing camps about how to resolve this issue but there has been much more debate than action.

This could lead to hard forks of the cryptocurrency. More on that later.

One of the previously oft touted benefits of Bitcoin was anonymity in transactions. While Bitcoin transactions are pseudonymous, unless you buy bitcoins in cash from someone on the street, there are links back to the exchanges and thus bank accounts.

I’m sure there are ways to purchase Bitcoins anonymously but it’s not easy or safe. If you know how to do this I’d value your input in the comments section below. 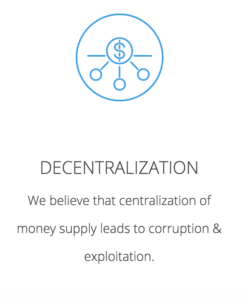 A screen capture from the Bitcoin Foundation (bitcoinfoundation.org) website

Despite propaganda that Bitcoin is decentralised–it is in fact controlled by the Bitcoin Foundation in conjunction with the Bitcoin Core developers and the larger miners who can afford the expensive application specific integrated circuit hardware required to successfully mine Bitcoin.

In sort of an Orwellian double-speak both the Bitcoin Core developers and Bitcoin Foundation talk about how they keep Bitcoin decentralised.

The Bitcoin Core development team is not very big.

I don’t see how a group of 3 “maintainers” and a dozen or so contributing developers is “decentralised”.

If I wanted to be really mean I would compare the Bitcoin Foundation to the Federal Reserve and the miners to the big wall street banks.

But I won’t do that.

The main advantage Bitcoin has over the Federal Reserve is that the number of Bitcoins that will be created is fixed at 21 million whereas there is no limit to how many dollars the Federal Reserve can conjure from within the shady halls of the Eccles Building.

A screen capture of a written statement from bitcoin.org/en/bitcoin-core/

However, if Bitcoin forks, like Ethereum did, then the number of Bitcoins will effectively double.

I don’t necessarily have a problem with a cryptocurrency being centrally controlled.

While I have a general bias towards decentralisation and subsidiarity (when possible)–I think that a benevolent dictatorship can be good–provided it is easy to jump ship if the centralised power becomes corrupt.

Could these problems be fixed? Sure. Smart, motivated individuals working together towards a common goal can accomplish amazing things. But I don’t see the Bitcoin community taking these problems seriously.

For these reasons I believe that Bitcoin is not the future of cryptocurrencies.

If you are interested in purchasing Bitcoins, I show you how to buy Bitcoins on Coinbase.